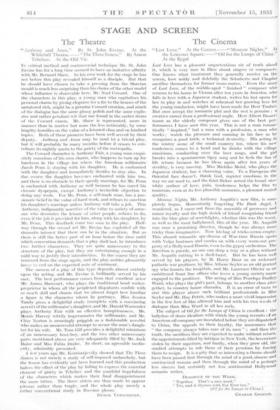 "Anthony and Anna." By St. John Ervine. At the Whitehall Theatre.—" The Three Sisters." By Anton Tchehov. At the Old Vic IN critical method and controversial technique Mr. St. John Ervine has for a long time seemed to have an imitative affinity with Mr. Bernard Shaw. In his own work for the stage he has not before this play revealed himself as a disciple. But that he should have chosen to take a pressing from the Shavian mould is much less surprising than his choice of the other model whose influence is observable here, Mr. Noel Coward. One of the characters in this play, a young man who capitalises his personal charm by giving elegance for a fee to the houses of the untutored rich, might be a genuine Coward creation, and much of the dialogue has the same glossy polish and the same explo- sive and rather petulant wit that one found in the earlier items of the Coward canon, Mr. Shaw is represented, more in Manner than in matter but none the less noticeably, by some lengthy homilies on the value of a leisured class and on kindred topics. Both of these pioneers have been well served by their deputy. Anthony and Anna may be (and is) a trivial play, but it will probably be many months before it ceases to con- tribute its nightly quota to the gaiety of the metropolis.

The Coward character is Anthony Fair, a young man exqui- sitely conscious of his own charm, who happens to turn up for luncheon in the village inn where the American millionaire Jacob Penn is staying with his daughter. He is enchanted with the daughter and immediately decides to stay also. In due course the daughter becomes enchanted with him too, and there is no obstacle to their speedy marriage, for Mr. Penn is enchanted with Anthony as well because he has cured his chronic dyspepsia, except Anthony's invincible objection to doing any work. For Mr. Penn, a self-made man, has a pas- sionate belief in the value of hard work, and refuses to sanction his daughter's marriage unless Anthony will take a job. This Anthony, indignantly assertive of the value to society of some- one who decorates the leisure of other people, refuses to do, even if the job is provided for him, along with his daughter, by Mr. Penn. This deadlock come too soon in the play. Half- way through the second act Mr. Ervine has exploited all the dramatic interest that there can be in the situation. But as there is still the better part of an hour before the time until which convention demands that a play shall last, he introduces two further characters. They are quite unnecessary to the structure of the play, but they are entertaining enough in a mild way to justify their introduction. In due course they are removed from the stage again, and the play ambles pleasantly home to end on the expected note of sentiment.

The success of a play of this type depends almost entirely upon the acting, and Mr. Ervine is brilliantly served by his east. The best performance comes from that excellent actor Mr. James Harcourt, who plays the traditional head waiter- proprietor in whom all the perplexed disputants confide with so much skill and charm that we almost forget how familiar a figure is the character whom he portrays. Miss Jessica Tandy gives a delightful study (complete with a convincing accent) of the millionaire's daughter, and Mr. Harold Warrender plays Anthony Fair with an effective bumptiousness. Mr. Morris Harvey wittily impersonates the millionaire, and Mr. Clive Norton is amusingly priggish as a fashionable novelist

who makes an unsuccessful attempt to secure the man's daugh- ter for his wife. Mr. Toni Gill provides a delightful miniature of an unnecessary boot-boy, and the two other unnecessary parts mentioned above are very adeqUately filled by Mr. Jack Raine and Miss Fabia Drake. In short, an agreeable medio-

A few years ago Mr. Komisarjevsky showed that The Three .Sisters is not merely a study of self-imposed melancholy, but the lesson has evidently not been learned and this production halves the effect of the play by failing to express the essential element of gaiety in Tchehov and the youthful hopefulness 9f the characters which makes their final disappointment the more bitter.. The three sisters are thus made to appear piteous rather than tragic, and the whole play merely a rather conventional study in Russian gloom.