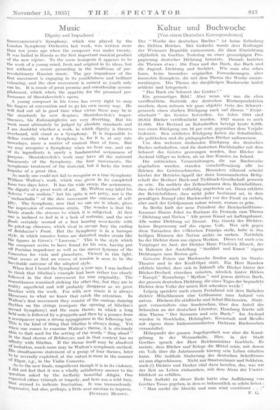 Page 15, 15 November 1935 — M u sic Dignity and Impudence SuesrArroviren's Symphony, which was played by
Close

M u sic Dignity and Impudence SuesrArroviren's Symphony, which was played by

the London Symphony Orchestra last week, was written more than ten years ago when the composer was under twenty. It waslaffed in Russia as the first important musical product Of the new regime. To the mere bourgeois it appears to be the work of a young mind, fresh and original in its ideas, but `hot without a secure grounding in the traditions of pre- revolutionary Russian music. The gay impudence of the first movement is engaging in its youthfulness and brilliant 'colouring; and the slow movement is earnest as youth only can be. It is music of great promise and considerable accom- Plishment, which whets the appetite for the promised per- • formance of Shostakovitch's opera.

A young composer in his teens has every right to snap his fingers at convention and to •go his own merry way. He Will find 'out all in good time what virtue there may be in the standards he now despises. Shostakovitch's imper- tinences, ' his Eulenspiegleries are very diverting. But 'his Work must ultimately be judged by absolute standards and I am doubtful whether a work, in which dignity is throWn overboard, will stand as a Symphony. It is impossible to define exactly what a Symphony is,' for it is, at any rate nowadays; more a matter of 'content than of form. But We may recognise a Symphony when we hear one, and one of its ingredients is surely a fundamental scriouSness of 'Purpose. Shostakovitch's work may have all the outward Iinearrients of the Symphony, the four movements, the symphonic treatment of the Material; but it lacks the inner Impulse of a great idea.

'As'surely one could not fail to recognise as a true Symphony William 'WaltOn's work, which was given in its completed form two 'days later. It has the wide sweep, the seriousness, the dignity eta great work of art: Mr. Walton may label his Scherzo " con malizia,'? but his spite is not petty; nor is the melancholia " of the slow movement the outcome of self- Pity. The Symphony, now that we can see it 'whole, gives the impression of enormous strain. The Wonder is that the 'fabric stands the stresses to which it is subjected. At first one is inclined to feel in it a • lack of restraint, and the new finale certainly seemed at a first hearing over-hectic with its piled-up climaxes, which rival in savage fury the ending of Belshazzar's Feast. But the Symphony is in a baroque style, in which massive forms are distorted under strain like the figures in Greco's " Laocoon." This is the style which the composer seems to have found for his own, having put Off Parisian impudence as well as the suaver lyricism of the Concertos for viola and pianoforte. Viewed in this light, What seems at first an excess of tension is seen to be the Inevitable outcome of the adopted style.

When first I heard the Symphony a year ago, I was inclined to think that Sibelius's example had been rather too closely followed in the first movement for true originality. The resemblances remained striking the other day, but they are in reality superficial and will probably disappear as we groW familiar with the work. For with new music it is always likenesses to what we know that catch the attention. In Walton's-first movement they consist of the curious dancing rhYthrn on the strings (compare the opening of Sibelius's second Symphony) and the main theme, in which a long held note is followed by a gruppetto and then by a pounce from semiquaver upon a strong appoggiatura in the following bar. This is the 'kind Of thing that Sibelius is always doing.- Yet ‘I'llen one comes to examine Walton's theme, it is obviously akin to thdt used for the setting of the words " Sing aloud " hi the final chorus of Belshazzar, and in that context has no affinity, with 'Sibelius. If the .theme itself. may be absolved *Of imitation, much more may be Walton's symphonic method. • simultaneous' statement of a group of four themes, later to be severally exploited; at the outset is more in the manner Of Elgar, e.g:, in the Violin Concerto. As to the new finale, magnificent though it is in its violence, ▪ did not feel that it was a wholly satisfactory answer to the question asked by the ineffably beautiful Adagio: One that either triumph or tragedy, and here was a wild fury, !ut seemed to indicate frustration. It was tremendously Impressive, but also, perhaps, a little Over anxious to impress. DYNELEY HTJSSEY.