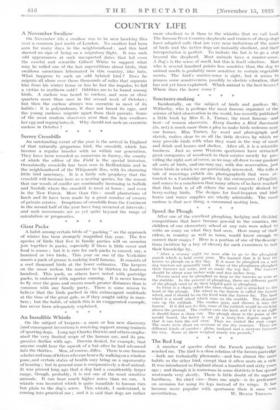 On the subject of keepers—a more or less new discovery (and consequent invention) is receiving support among trainers of sporting dogs. Long ago Charles Darwin and others empha- sised the very limited scope of the human ear, and its pro- gressive decline with age. Darwin denied, for example, that anyone could hear the squeak of a bat after he had advanced into the thirties. Men, of course, differ. There is one famous scholar and man of letters who can hear a fly walking on a window pane, and certain states of health may bring on a superacuity • of hearing ; but in general man is comparatively a deaf animal.

• It was proved long ago that a dog had a considerably larger range, though, probably, it is not one of the most sensitive animals. It can hear much higher notes than we . can. A whistle was invented which is quite inaudible to human ears 'but plain to the dog's sense. This whistle, I understand, is coming into practical use ; and it is said that dogs are rather

more obedient to it than to the whistles that we call loud. The famous West. Country shepherds and trainers of sheep-dogs have adopted calls that are very near imitations of the notes of birds and the better dogs are instantly obedient, and their interpretation is perfect. To imitate the bat is to go a step beyond the shepherd. Most animals have a master-sense. A dog's is the sense of smell, but this is itself selective. Man who is several hundred points less sensitive than the dog to animal smells is probably more sensitive to certain vegetable scents. The bird's master-sense is sight, but it seems to possess some sensitiveness, possibly to electric vibration, that has not yet been explained. Which animal is the best hearer.? Where does the horse come ?