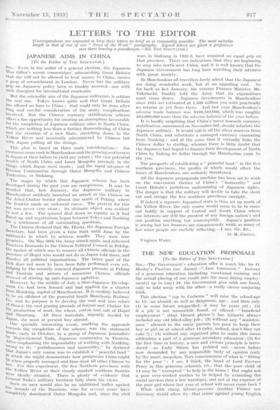 [Correspondents are requested to keep their letters as brief as is reasonably possible. The most suitable length is that of one of our " News of the Week" paragraphs. Signed letters are given a preference over those bearing a pseudonym.—Ed. THE SPECTATOR.] JAPANESE AIMS IN CHINA [To the Editor of THE, SPECTATOR.] • Silt ,---Even in the midst of a general election, the Japanese War Office's recent communique, admonishing Great Britain that she will not be allowed to lend money to China, causes a gasp of astonishment in London. Never has the military grip on Japanese policy been so frankly asserted–L-nor with such disregard for international courtesies.

But the ostensible aim of the Japanese militarists is seldom the real one. Tokyo knows quite well that Great Britain has offered no loan to China ; that could only be done after long and careful consideration of the many complications involved. But the Chinese currency stabilisation scheme offers a fine opportunity for creating an atmosphere favourable for the Completion of Japanese military aims in North China, which are nothing less than a further dismembering of China and the creation of a new State, stretching down to the Yellow River and nominally administered by Chinese but With Japan pulling all the strings.

This plan is based on three main considerations : the enormous sums sunk in Manehoukuo and the growing restiveness in Japan at their failure to yield any return ; the vast potential wc,t1th of North China and Inner Mongolia precisely in the things which Japan most needs ; and the rapid advance of Ilossian Communism through Outer Mongolia and Chinese Turkestan, or Sinkiang.

The stages by which this Japanese scheme has been developed during the past year are conspicuous. It may be recalled that, last January, the Japanese military in kanehoukuo suddenly launched an attack at the Chinese on the Jehol-Chahar border almost due north of Peking, where the frontier made an awkward curve. The pretext for this act was never very clear ; its ultimate object was evident to not a few. The quarrel died down as rapidly as it had flared up, and negotiations began between Tokyo and Nanking f°r a settlement of all outstanding questions. The Chinese declared that Mr. Hirota, the Japanese Foreign Secretary, had been given a time limit until June by the Militarists in which to achieve results. They were true ProphProphets. On May 30th the Army struck again, and delivered ets. Demands to the Chinese Political Council in Peking, the upshot of which was to remove all Chinese officials in the Province of Hopei who would not do as Japan told them, and dissolve all political organisations. The latter part of the task does not seem to have been fully performed even yet, jialging by the recently renewed Japanese pressure at Peking and Tientsin and arrests of numerous Chinese officials aeoused of stirring up anti-Japanese agitation. However, by the middle of July a Sino-Japanese Develop- Meat Co. had been formed and had applied for a charter front Hsinking, capital of Manehoukuo. It is credibly believed t° be an offshoot of the powerful South Manchuria Railway Co, and its purpose is to develop the coal and iron mines Or Shansi, the vast grazing grounds of Sniyan and Chahar for the production of wool, the wheat, cotton and salt of Hopei and Shantung. All these materials, urgently needed by "Pan, she must at present buy abroad.

One speeially interesting event, marking the approach towards the completion of the scheme, was the statement made, early in October, to a group of Japanese journalists Major-General Tada, Japanese commander in Tientsin. After emphasising the impossibility of working with Nanking, owing to its " perfidiousness and immorality," he declared that Japan's only course was to establish a " peaceful land iuu

Which she Might demonstrate how prosperous China might !'e when properly managed and thus draw all other Chinese to um For this experiment, the five Northern provinces with the Yellow River as their clearly Marked southern frontier were ideally situated. • There is plenty of evidence that General Tada's military brethren fully share his views. Such an area would also be an additional buffer against the inroads of the Russians, who for several years have t‘t"Pletely dominated Outer Mongolia and, since the civil

wars in Sinkiang in 1932-3, have acquired an equal grip on that province. There are indications that they are beginning to seep into north-west China, and it is well known that the Japanese Government has long been watching their advance with great anxiety.

In Manchonkuo all travellers freely admit that the Japanese

are doing wonderful work, but at an appalling cost. So far back as last January, the veteran Finance Minister, Mr. Takahashi, frankly told the Army that its expenditure Must come 'down. Japanese investments. in Manehoukuo since 1031 ,are estimated at 1,500 million yen with practically no returns as yet from them. And last year Manchoukuo's adverse trade balance was $199,182,000, which was roughly $84,000,000 more than the adverse balanee 'of the year before.

It is hardly surprising that China's move towards currency stabilisat joie announced on November 3rd, should infuriate the Japanese military. It would call in all the silver reserves from North China, and substitute a managed currency emanating from Nanking ; and at the same time it virtually links the Chinese dollar to sterling, whereas there is little doubt that the Japanese had hoped to finance their development of North China by linking its dollar through the Manchurian yuan to the yen.

The prospects of establishing a " peaceful land " in the five northern provinces, the profits of which would offset the losses of Manehoukuo, are seriously threatened.

All the Japanese propaganda machine has been set to work on the convenient themes of China's " insincerity " and Great Britain's perfidious undermining of Japanese rights. The danger is that the military will decide to take the short cut and occupy the five northern provinces outright.

If indeed a separate Japanised state is thus set up north of the Yellow River, the only course would seem to be to come out boldly in support of Central and South China where our interests are still the greatest of any foreign nation's and our position anything but contemptible. Japan's position is strong but her finances are conspicuously weak, as many of her wiser people are ruefully reflecting.---I am, Sir, &c., 0. M. GREEN. 0. M. GREEN.