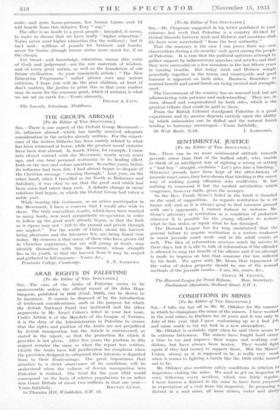 Sin,—There is one aspect of the Oxford Group Movement— its influence abroad—which has hardly received adequate consideration in the articles already written. For the experi- ence of the writers hitherto has been mainly related to what has been witnessed at home, while the greatest moral victories have been won abroad. In South Africa, for example, I came into closest contact with the Movement, nearly seven years ago, and can bear personal testimony to its healing effect both on the race and colour questions. In earlier years, before its influence had been felt, I had almost begun to despair of the Christian message " winning through." Last year, on the other hand, when I travelled as far North as Bulawayo and Salisbury, it was clear to me that the good seed which had been sown had taken deep 'root. A definite change in racial relations had begun, in which the Oxford Group had taken a noble part.

While bearing this testimony, as an active participator in the Movement, I have a concern that I would also wish to share. The truly marvellous results, which have been reached in many lands, now need sympathetic co-operation in order to follow up the good work already begun, so that the fruit as it ripens may not " fall to the ground and perish through, our neglect." For the words of Christ, about the harvest being plenteous and the labourers few, are being found true today. My concern is that many of those who have grown old in Christian experience, but are still young at heart, may identify themselves with this Movement, whose strength lies in its youth, so that the harvest from it may be reaped and gathered in full measure.—Yours, &e.,