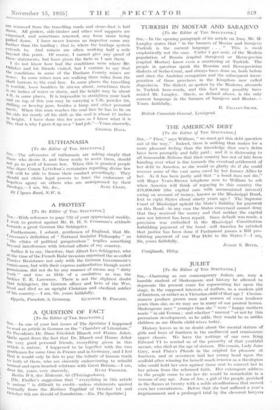 [To the Editor of TILE SPECTATOR.] SIR,--" First," says William, " we must get this debt question out of the way." Indeed, there is nothing that makes for a More pleasant feeling than the knowledge that one's debts have been promptly and fully paid ; and it is distressing to all honourable Britons that their country has not of late been handing over what is due towards the eventual settlement of her debt to America, as she ,would so gladly do if she could recover some of the vast sums owed by her former ,Allies to her. As it has been justly said that " a bond does not die," will Major Yeats-Brown telephone now , to William ' to ask when America will think of repaying to this country tho 178,060,000 (the capital sum with accumulated 'interest) owing on account of money, known as the Mississippi Bond, lent to eight States about ninety years ago ? The Supreme Court of Mississippi upheld the State's liability for payinent on this Bond—in any case the States concerned cannot deny that they received the money and that neither the capital sum nor interest has-been repaid. Since default was made, a provision was embodied in the Mississippi Constitution forbidding payment of the bond—will America be , satisfied that justice has been done if Parliament passes a Bill pro- hibiting payment of our War Debt to the States am( Sir, yours faithfully, ,