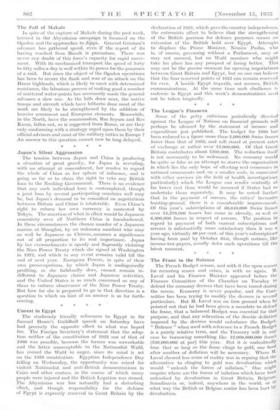 Page 2, 15 November 1935 — Japan's Silent Aggression The tension between Japan and China is
Close

Japan's Silent Aggression The tension between Japan and China is

producing a situation of great gravity, for Japan is, revealing, with no attempt at concealment, her resolve to regard the whole of China as her sphere of influence, and is going so far as to claim the right to veto any British loan to the Nanking Government. There is no evidence that any such individual loan is contemplated; though a joint loan by several participating countries well may be, but Japan's demand to be consulted on negotiations between Britain and China is intolerable. Even China's right to reform her own currency is contested by Tokyo. The assertion of what in effect would be Japanese suzerainty over all Northern China is foreshadowed. In these circumstances the chance murder of a Japanese marine at Shanghai, by an unknown assailant who may as well be Japanese as Chinese, assumes a significance out of all proportion to its real importance. Japan by her encroachments is openly and flagrantly violating the Nine Power Treaty which she signed at Washington in 1922, and which in any event remains valid till the end of next year. European Powers, in spite of their own preoccupations, by which Japan is undisguisedly .profiting, as she habitually does, cannot remain in- different to Japanese claims and Japanese activities, and the United States is as much concerned as any of them to enforce observance of the Nine Power Treaty. But how far she is prepared to go in that direction is a question to which no hint of an answer is so far forth- coming.