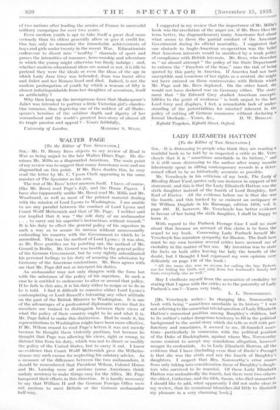 WALTER PAGE [To the Editor of THE SPECTATOR.] Sin,—Mr. D.

Henry Rees objects to my review of Road to War as being unjust to the late Walter Hines Page. He dis- misses Mr. Millis as a disgruntled American. The main point of my review was to suggest that many Americans were and are disgruntled on this point. If Mr. Rees doubts this, he may read the letter by Mr. C. Upson Clark appearing in the same number of The Spectator as his own.

The rest of Mr. Rees' letter answers itself. I have, of course, (like Mr. Rees) read Page's Life, and the Houie Papers. I have also (apparently unlike Mr. Rees) read Mr. Millis and Mr. Woodward, as well as most of the printed material dealing with the mission of Lord Lyons to Washington. I am unable to see any parallel between the conduct of Lord Lyons and Count Wolff Metternich and that of Mr. Page. I neither said nor implied that it was " the sole duty of an ambassador . . . to carry out his superior's instructions without remark." It is his duty to effect the general policy of his superiors in such a way as to secure its success without unnecessarily embroiling his country with the Government to which he is accredited. This was the method of Lord Lyons ; it was also, as Mr. Rees gratifies me by pointing out, the method of Mr. Gerard in Berlin. Mr. Gerard was hostile to the general policy of the German Government, but he very rightly subordinated his personal feelings to his duty of securing the admission by Germany of the American, contentions. Mr. Rees agrees with me that Mr. Page did not so interpret his duties.

An ambassador may not only disagree with the form but with the substance of the policy of his superiors. In such a case he is entitled to endeavour to alter or amend that policy. If he fails in this aim, it is his duty either to resign or to do as he is told. I find it difficult to conceive either Lord Lyons's contemplating or Lord Russell's tolerating any other attitude on the part of the British Minister to Washington. It is one of the advantages of a professional diplomatic service that its members are trained to distinguish between their views of what the policy of their country ought to be and what it is. Mr. Page failed to make this distinction. Had he made it, his representations to Washington might have been more effective. If Mr. Wilson ceased to read Page's letters it was not merely because he thought them violently partisan, but because he thought that Page was allowing his views, right or wrong, to distract him from his duty, which was not to direct or modify the policy of the United States, but to carry it out. I know no evidence that Count Wolff Metternich gave the Wilhelm- strasse any such excuse for neglecting his salutary advice. As a measure of the difference between the two ambassadors, it should be remembered that President Wilson, Colonel House

and Mr. Lansing were all anxious (some Americans think unduly anxious) to make things easy for the Allies. Mr. Page hampered their efforts in this direction. It is hardly necessary to say that William II and the German Foreign Office were not anxious to meet Britain or the German ambassador half-way.

I suggested in my review that the importance of Mr. Millis's book was the-revelation of the anger (or, if Mr. Rees likes the term better, the disgruntlement) many Americans feel about what seems to them the partial conduct of the American Government during its official neutrality. I suggested that one obstacle to Anglo-American co,operation, was the belief ,that American interests would be sacrificed by a weak policY of compliance with British interests. Mr. Rees, who describes as " an absurd attempt " the policy of the State Departmeat to enforce the " Freedom of the Seas," runs the risk of being quoted by this party in America. If America had not been susceptible and tenacious of her rights as a neutral, she might not have entered on those controversies with Britain which Mr. Page and Mr. Rees deplored. On the other hand, she would not have declared war on Germany either. The state' Anent that " Sir Edward Grey studied American suscepti- bilities to the point of weakness " is both unjust to the late Lord Grey and displays,. I feel, a remarkable lack of under• standing of the potentialities for mischief inherent in, the policy of cutting off German commerce without declaring a