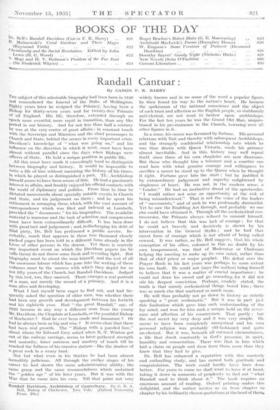 tat subject of this admirable biography had been born in 1848 and remembered the funeral of the Duke of Wellinkton. Eighty years later he resigned the Primacy, having been a Bishop for thirtY-scven years and for twenty-five Primate of all 'England. His life, therefore, extended through' an epoch more eventful, more rapid in 'transition, than any like period in our history. And fot not less than half a' century he was at the very centre of great affairs : in constant touch With the Sovereign and Ministers and the chief personages in Church and State, behind the scenes in every important crisis. Davidson's knowledge of " what was going on," and his influence on the direction in which it went, must have been almost without parallel since the days when Bishops were qfficers of, ,State. He held a unique position in public life..

All this must have made it exceedingly hard to distinguish between biography and history. It would be impossible to Write a life of him without narrating the history of his times, in which he played so distinguished a part. Th.: Archbishop himself seems to, have been aware of this. He had a passionate interest in affairs, and frankly enjoyed his official contacts with the world of diplomady and politics. From time to time he dictated memoranda about .specially notable events in Church and State, and his judgement on ;them ; and he spent his retirement in arranging these, which, with the vast amount of correspondence which was filed and indexed at Lambeth, provided the " documents " for his biographer. The available Material is immense and the task of selection and compression Must have been extraordinarily difficult. It has been done With great tact and judgement ; and, in discharging his debt of filial piety, Dr. Bell has performed is public service. In- evitably, much" that appearS in these two thousand closely Packed pages has been told in a different form already in the Lives of other persons in the drama. Yet there is scarcely any important event on which the Davidson papers (as he calls them) do not throw some fiesh and revealing light. But biography must be about the man himself, and the test of all the enormous labour whiCh has gone into the Writing of these volumes must be the success with which they depict for us not fifty years of the Church, but Randall Davidson. Judged by this test, too, they succeed. There emerges a real portrait . of a man, not merely the record of a primacy. And it is a Man alive and deVeloping. What I had myself been eager to find out, and had fro- „quently asked the question of older men, was whether there had been any growth and development between his fortieth and his eightieth year. Had ” the great Randall," say, of '1920 become in any way a different man from the young Mr. Davidson, the Chaplain at Lambeth, or the youthful Bishop of Rochester ? Had he ever been crude and immature ? Or had he always been so big and wise ? It seems clear that there had been real growth. The " Bishop with a puzzled face," about wham Sir Edward Grey asked when R. Jr. Winton got out of the railway carriage, seems to have gathered strength and maturity,' inner sureness and mastery of touch till he reached the fullness of his massive stature—like the shadow of a great rock in a weary land. '

Not but what even in his thirties he had been almost incredibly judicious. All through the earlier stages of his career - he had shown the same administrative ability, the same grasp and the same resourcefulness which sustained the "'golden age " of his later years. But it was with the War that 'he came into his own. Till that point not very Randall Davidson, Archbishop of Canterbury. By G. K. A. Bell, Bishop of Chichester. Two Vols. (Oxford University Press. 3Gs.)

widely known and in no sense of the word a popular figure, he then found his way ,to the nation's heart. He became the spokesman of the national conscience and the object of such trust and affection as the English people, so stubbornly anti-clerical, are not wont to .bestow upon' archbishops. For the last ten years he was the Grand Qld Man; tinqUes- Coned in his pre-eminence in the Church, towering" over 'all other figures in it.

In a sense, his career was favoured by fortune. His personal relations with Tait and thereby with subsequent Archbishops, and the strangely confidential relationship into which he was thus drawn with Queen Victoria, made his primacy almost inevitable. And in this, history may well repeat itself, since three of his own chaplains are now diocesans. But those who thought him a trimmer and a courtier can read here with what genuine courage and willingness to sacrifice a career he stood up to the Queen when he thought it right. Fortune gave him the start ; but he justified it by extraordinary judgement and sagacity enlightened by singleness of heart. He was not, in the modern sense, a " Leader." He had an instinctive dread of the spectacular.

I would rather not seize an opportunity at the risk of being misunderstood." That is not the voice of the leaders of " movements," and of such he was profoundly distrustful. Yet he saw the Enabling Act through, and probably no one else could have obtained it. Through all the ecclesiastical con- troversies, the Primate always refused to commit himself. I do not believe that this was lack of courage ; for that lie' could act bravely and decisively is shown by "his intervention in the General Strike ; and he had that rarest form of courage which is not afraid of being called coward. It was rather, as Dr. Bell suggests, that his whole conception of his office, coloured in this no doubt by his own temperament, was that of Moderator or Chairman helping the meeting to make up its own mind, rather than , that of chief priest or major prophet. His defeat over the' Prayer Book in his last years was perhaps to some extent his own fault. He could not (says the author) bring himself to believe that it was a matter of crucial importance ; lie could not draw his sword and go crusading, for it did not stir his deepest conviction. ' Perhaps, crudely stated, the truth is that merely ecclesiastical things bored him ; there was so much else that mattered so much more.

He will 'thus probably not go down in history as strictly speaking a " great ecclesiastic." But it was in part just this limitation which gave him such understanding of the lay mind, and won for him such a unique hold on the rever- ence and affection of his countrymen. That partly ; but the real secret lay very deep and it was very simple. -He seems to have been completely unmystieal and his own personal religion was probably old-fashioned and quite un-clerical. But it was, beneath all outward circumstances, a life that dwelt constantly in God's presence, in quiet, humility and consecration. There was that in him which laid a claim on people and drew from them more than they knew that they had to give.

Dr. Bell has enhanced a reputation with this masterly and enthralling study, and has earned both gratitude • and congratulation. The work could hardly have been done better. For years to come we shall want to have it at hand, taking it cloWn in moments of perplexity to find out what Randall used to think about it." The book requires an enormous amount of reading. Oxford printing makes this delightful, and the author invites' us 'on from chapter to chapter by his brilliantly chosen quotations at the head of than,