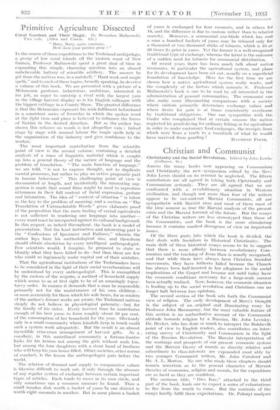 Coral Gardens and Their Magic. By Bronislaw Malinowski. ' Two. vols. (Allen and Unwin. 42s.) " Mary, Mary, quite contrary, How does your garden grow ? "

IN the course of three expeditions to the Trobriand archipelago, a group, of low coral islands off the eastern coast of New Guinea,. Professor Malinowski spent a great deal of. time in expanding this simple, charming question into an almbst unbelievable battery of scientific artillery. The answer he got from the natives was, in a nutshell, " Hard work and magic spells," and to each of these topics, broadly speaking, he devote4 a volume of this book. We are presented with a picture of a Melanesian gardener, industrious, ambitious, interested in his job, as eager to outstrip a rival with the largest yam in the village harvest display as is his English colleague with the biggest cabbage in a County Show. The greatest difference is that the Melanesian expresses his wish-fulfilment beforehand in a consistent series of formulae in which the spoken word at the 'tight time and place is believed to influence the forces of Nature in the, desired ,direction.. ,But as the author has, shown 'Ellis reliance on words is not, altogether Vain ; linked stage by stage with manual labour the magic spellS help in the organisation of the industry and give confidence to the worker.

The most important contribution from the scientific point of view is the second volume, containing a detailed analysis of a mass of linguistic material which is . caught up into a general theory of the nature of language and the problem of translation. " The main function of language," we are told, " is not to express thought, not to duplicate, mental processes,, but rather to play an active pragmatic part in human behaviour." This challenging point of view is documented at length, and incidentally the interesting sug- gestion is made that sound films might be used to reproduce utterances in their full context of facial expression, gesture and intonation. The idea of " context of situation " is taken as the key to the problem of meaning, and a section on " The Translation of Untranslatable Words " gives elaborate proof of the proposition that the mere finding of verbal equivalents is not sufficient in rendering one language into another—. every word must be interpreted against its cultural background. In this respect, as indeed throughout, the book is a model of presentation. Not the least instructive and interesting part is the " Confessions of Ignorance and Failures," wherein the author lays bare his methodological' sins; and therefrom should obtain absolution by every intelligent anthropologist. Few scientists would, I imagine, be prepared to state so bluntly what they have failed to do—but then there are few who could so ingeniously make capital out of their mistakes.

, That, the agricultural institutions of the Trobrianders have to be considered in the light of their social reverberations will be understood by every anthropologist. This is exemplified by the custom of the urigubu, a method of household supply which seems to us at first sight to be of an amazingly topsy- tUrvy order. In essence it demands that a man he responsible primarily not for the maintenance . of his own children— or more,accurately for those which his wife bears, for as readers of the author's former works are aware, the Trobriand natives simply do not believe in physiological paternity-but, for the family of his sister. Every harvest time he contributes enough of his best yams to form roughly about 50 per cent. of the consumption of her household for the year. Obviously only in a small community where kinsfolk keep in touch could such a system work adequately. But the result is an almost incredible criss-cross arrangement of harvest gifts. As a corollary, in this matrilineal community a fortune-hunter looks for his heiress not among the girls without male kin, but among the lone daughters with a stout band of brothers who will keep his yam house filled. Other societies, other norms of conduct, is the lesson the anthropologist puts before, the world.

The relation of demand and supply to comparative values is likewise difficult to work out, if only through the absence of any regular system of exchange between certain important types of articles. Each tends to move in its own circle, and only sometimes can a common measure be found. Thus a small wooden dish worth a basket of yams In one district is worth eight coconuts in another. But in some places a basket of yams is exchanged for four coconuts, and in others for 16, and the difference is due to custom rather than to relative scarcity. Moreover, a ceremonial axe-blade which has cost a man a hundred baskets of yams may be released only for a thousand or two thousand sticks of tobacco, which is 10 or, 20 times its, price in yams. Yet the former is a well-recognised traditionaitYpe of exchange, whereas the latter is the outcome of a sudden need for tobacco for ceremonial distribution. • Of recent years there has been much talk about native, economics, in particular the agricultural system, and plans- for its development have been set out, usually on a superficial foundation of knowledge. Here for the first time We are: shown how a native agricultural system really workS, and the complexity of the factors which animate it. Professor Malinowski's book is one to be read by all interested in the administration of peasant communities. The economist can' also •make some illuminating comparisons with a society, Where CeiStoin primarily determines exchange values and' where desire for gain is at times consistently ovesborne, by traditional obligations. One can sympathise with the, trader who complained that at certain seasons the native, neglected his pearl-diving for ordinary fishing or for agriculture, in order to,make customary food exchanges, the receipts front' which were from a' tenth to a twentieth of what he would• have' received from pearling !'