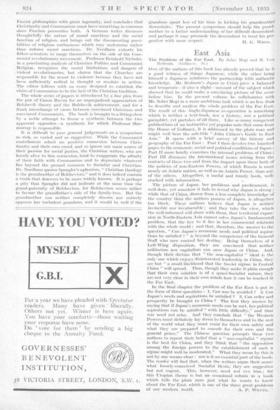 The Problem of the Far East. By Sobei Mogi and H. Vero Redman. (Gollancz. as.) • • ONE of the authors of this book has already proved that he is a good witness of things Japanese, while the other being himself a Japanese reinforces the, partnership with authentic knowledge. Mr. Redman's Japan in Crisis gave a balanced and temperate—if also a slight—account of the subject which showed that he could make a convincing picture of the scene before .him. In the present volume he collaborates with Mr: Sobei Mogi in a more ambitious task which is no less thaw to describe and analyse the whole problem of the Far East. The result of this Anglo-Japanese co-operation is something which is neither a text-book, nor a history, nor a political pamphlet, yet partakes of all three. Like so many competent publications of an instructive yet popular note that conic from the House of Gollanez, it is addressed to the plain man and might well bear the sub-title " John Citizen's Guide to East Asia." It opens with a brief survey of the history and geography of the Far East : Part I then devotes two hundred pages to the economic, social and political conditions of Japan ; Part H more briefly examines the internal problems of China': Part III discusses the international issues arising from the contacts of these two and from the impact upon them both of the policies of non-Eastern Powers, of which Russia is more nearly an Asiatic nation, as well as an Asiatic Power, than any of the others. Altogether, a useful and timely book, well

The picture of Japan, her problems and predicament, is well done, yet somehow it fails to reveal why Japan is strong while that of China, drawn from a less complete knowledge of the country than the authors posseas of Japan, is altogether too black. These authors believe that Japan is neither invincible nor invulnerable ; and they take the view, which the well-informed will share with them, that territorial expan- sion in North-Eastern Asia cannot solve Japan's fundamental problem, that the key to it lies in her commercial relation's with the whole world ; and that, therefore, the answer to the question, ", Can Japan's economic needs and political aspira- tions be satisfied ? " is beyond the competence of the General Staff who now control her destiny. Being themselves of a Left-Wing disposition, they are convinced that neither militarism nor capitalism can save Japan or China. And, though their diettiM that " the non-capitalist " ideal is the only one' which enjoys disinterested leadership in China, they see but " a small likelihood that the Soviet regime in Central China " will spread. Thus, though they make it plain enough that their own solution is of a quasi-Socialist nature, they are not very clear in their own minds how it can be reached in the Far East.

In the final chapter the problem of the Far East is put in the form of three questions : 1. Can war be avoided ? 2. Can Japan's needs and aspirations be satisfied ? 8. Can order and prosperity be brought to China ? The first they answer by saying that if Japan's economic needs can be met, her political_ aspirations can be satisfied " with little difficulty," and thuS war need not arise. And they conclude that " the Western' Powers must definitely lay down to themselves and to the rest, of the world what they must resist for their own safety and what they are prepared to concede for their own and the: general peace." The Chinese question prompts these two authors. to repeat their belief that a " non-capitalist " regime is the best for China, and they think that " the opposition among the foreign powers to the establishment of such a regime might well be moderated." What they mean by this is not by any means clear ; nor is it an essential part of the book. The reader will find, that, when the writers argue their sonic-. what loosely-Conceived Socialist thesis, they arc suggestive but not. cogent. This, however, need not vex him ; for this Utopian theme is but an occasional refrain in a book which tells the plain man just what he wants to know about the Far East, which is one of the three great problems