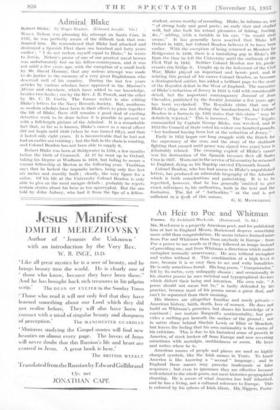 Robert Blake. By Roger Beadon. (Edward Arnold. 15s.) Wm: Nelson was planning his attempt on Santa Cruz, in 1707, he Was perfectly aware of the difficult task that con- fronted him. He remembered that Blake had attacked and destroyed a Spanish Fleet there one hundred and forty years earlier ; " I do not reckon myself equal to Blake," he wrote to Jeri-is. Nelson's praise of one of our greatest naval heroes was unfortunately lost on his fellow-countrymen, and it was not until a few years ago, Willi the exception of a small book by Mr. David Hannay, that any serious attempt was made to do justice to the memory of a very great Englishman who deserved well of his country. During the last few years articles by various scholars have appeared in the Mariner's 'Mirror and elsewhere, which have added to our knowledge, besides two books ; one by the Rev. J. R. Powell, and the other by Mr. C. D. Curtis. The former writer is also editing Blake's letters for the Navy Records Society. But, assiduous as modern 'scholars have been in their efforts to piece together the life of Blake, there still remains a good deal of exciting detective work to be done before it is possible to present us with a full-length picture of the Admiral. It is a remarkable fact that, so far as is known, Blake's career as a naval officer did not begin until 1649 (when he was turned fifty), and that it lasted only eight years. It is inconceivable that he had not had an earlier sea training ; but the link hi the chain is wanting, and Colonel Beadon has not been able to supply it.

Robert Blake was born at Bridgwater in 1508, a few months before the birth of Cromwell. At 17 he went up to Okford, taking his Degree at Wadham in 1618, but failing to secure a vacant fellowship at Merton in the following year. Tradition says that he lacked the requisite inches, being only five feet six inches and sturdily built ; clearly, the very figure for a sailor. Of his life at the University Colonel Beadon is only able to give us the most meagre details ; probably he rejects certain stories about his hero as too apocryphal. But the one told by John Aubrey, who had it from the lips of a fellow- student, seems worthy of recording. Blake, he informs us, was " of strong body and good parts ; an early riser and studied well, but also took his robust pleasures of fishing, fowling' &e.," adding, with, a twinkle in his eye, " he would steal swans." It has generally been asserted that Blake left. Oxford in 1625, but Colonel Beadon believes it to have been earlier. With the exception of being returned as Member for ,Bridgwater in 1,040, there is a tantaltsing gap in Blake's life from the time he left the University until the outbreak of the civilWei in 942,, Neither Colonel Beadon nor his, prede- cessois can bridge it. Caught up in the holocaust of the Civil War; Blake played an important and heroic part, and in relating this period of his career Colonel Beadon, as becomes a distinguished soldier, has added a brilliant page to the story of the Royalist defeat in the West of England. The narrative of Blake's reduction of Jersey in 1651 is told with considerable detail, but the important contemporary Journal of Jean Chevalier, published by the Societe Jersiaise a few years ago, has been ov,erlooked. The Royalists claim. that :. one of Blake's ships was lost during the bombardment, but Colonel Beadon in a footnote (p. 120) states that this claim " may be definitely rejected." This is incorrect. The `'fresco' frigate, commanded by Captain George Blake, was wrecked, and in 1653 the Council of State voted his widow one hundred pounds, "her husband having been lost at the reduction of Jersey."

. Early in 1652 began our long struggle with the Dutch for the supremacy of the seas, and the story of the stubborn fighting that ensued until peace was signed two yearilater is ndinirably related. The crowning exploit of Blake's career was his destruction of the Spanish treasure fleet off Santa Cruz in 1657. Worn out in the service of his country he returned to England, dying as his flagship entered Plyinouth Sound. Colonel Beadon, who has had access to Blake's unpublished letters, has produced an admirable biography of the Admiral, which is both conscientious and painstaking. It is to be regretted however, that he has generally omitted to give exact. references 10 his authorities, both ill the text and the footnotes. The list of ." Authorities "" at the end is not sufficient in it work of this nature.