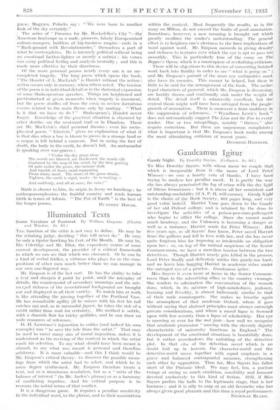 THE function of the critic is not easy to define. He may be the rebuking judge, deciding " this will never do." He may be only a tipster hawking his Cert. of the Month. lie may be, like Coleridge and Mr. Eliot, the expository centre of some current development, the provider of a critical framework in which we can see that which was obscured. Or he can be a kind of verbal fiddler, a virtuoso who plays for us the com- positions of other men much better than we can manage in. our own one-fingered way.

Mr. Empson is of the last sort. He has the ability to take g text and sharpen it point by point, until the interplay of details, the counterpoint of secondary meanings and the sub- merged richness of the associational background are brought out and displayed in all their variety. To watch him at work • is like attending the piecing together of the Portland Vase. He has remarkable agility (if he misses with his feet his tail catches on) and, as in successful jigsaw, he takes the risk of a misfit rather than wait for certainty. His method is subtle, with a donnish flair for tricky quibbles, and he can draw on wide resources of reference.

D. H. Lawrence's injunction to critics (and indeed his own example) was " to save the talc from the artist." That may be used to cover many sins of moral imposition, unless it is understood as the reviving of the context in which the artist made his selection. To say what should have been meant is • absurd, to say what was meant is personal and therefore arbitrary. It is more valuable—and this I think would he Mr. Empson's critical theory—to discover the possible mean- ings from which the artist had to select, and which he in some degree synthesised. Mr. Empson therefore treats a text, not as a unanimous resolution, but as a " ratio of the balance of interest " (in Mr. Auden's phrase) or as a harmony of conflicting impulses. And his critical purpose is to recreate the initial terms of that conflict.

It is a dangerous game. It requires a peculiar sensitivity to the individual word, to the phrase, and to their associations

within the. context. Most frequently the results, as in the essay on Milton, do not exceed the limits of good annotation. Sometimes, however, a new meaning is brought out which greatly modifies the reader's understanding. The general effect is to heighten one's alertness to the finer implications of word against word. Mr. Empson succeeds in giving density" and richness to textures over which the eye is apt to pass ton. Smoothly. This • 'is particularly true of the • essay on Tile'. .Beggar's Operas which is a masterpiece of revitalising criticism. • There-will be objections to this device of converting finished Work back into fluidity in order to see " what is going on " and Mr. Empson's pursuit of the more coy ambiguities must,_ also have, its enemies. This cannot be helped, but there is little to •be said for the arrangement of the book. The archer. typal characters of pastoral, which Mr. Empson is discussing,. are hastily drawn and continually sink under the weight of detail. The detail itself is admittedly excellent, but the central thesis might well have been salvaged froM the jungle- growth of annotation. There is moreover a faint snobbery in,' the suppression of references. " Wyndham Lewis's book "- does not automatically suggest The Lion and the Fox to every reader, One or two misspellings, notably " theives," also.. require correction. But these arc ungenerous complaints f What is important is that Mr. Empson's book ranks among. the most stimulating criticism of recent years.