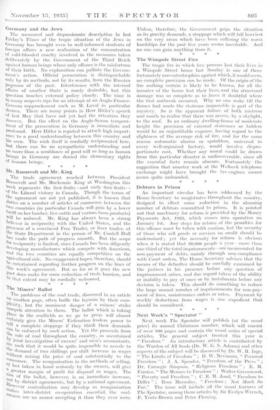 '* l'he Miners' Ballot The problems of the coal trade,

discussed in an article on another page, often bathe the layman by their com- PlexitY, but the imminent danger of a miners' strike -`),°1•Pels attention to them. The ballot which is taking Place in the coalfields as we go to press will almost certainly give the Miners' Federation leaders power to call a' complete stoppage if they think their demands eian. be enforced by such action. Yet the proceeds from t 11° sale of Coal throughout the country, as ascertained by investigation of owners' and men's accountants, are such that it would be quite impossible to accede to the demand of two shillings per shift increase in wages 14 l'Ithout raising the price of coal substantially to the e°°aumer. The reorganisation in the methods of selling, at last taken in hand seriously by' the owners, will give greater margin of profit for disposal as wages. The 14141 of the ballot, however, is an immediate increase, lr by district agreements, but by a national agreement. 1,2wever centralisation may deVelop as reorganisation takes inter-district co-operation essential, the coal- uWners are no nearer accepting it than they ever were. Unless, therefore, the Government grips the situation as its gravity demands, a stoppage which will fall heaviest on the very areas which have been suffering the worst hardships for the past five years seems inevitable, And no one can gain anything from it. • *