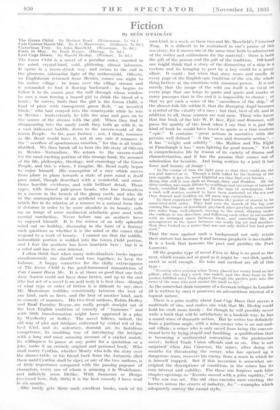 The Green Child • is a novel. of a peculiar order, rarefied in the mind, crystal-hard,-- cold, . glittering, almost inhuman.

It opens in a moon-struck way, and swims to the end in the glaucous, submarine light of the netherwiSrld, Olivero, an Englishman returned from Mexico, comes one night to his native village : he leans over the village stream and is astounded to find it flowing backward : he begins to follow it to its source past the mill through whose window lie sees a man forcing a bound girl to drink the blood of a lamb ; he enters, finds that the girl is the Green Child, a kind of pixie with transparent green flesh, " an inverted blush," who had strayed into the countryside while he was in Mexico : inadvertently he kills the man and goes on to the source of the stream with the girl. When they find it disappearing into the sandy earth they both go with it, in a vast iridescent bubble, down to the cavern-world of the Creen People. So far, pure fantasy : not, I think, romance as Mr. Read would have it, not at any rate if romance is the " overflow of spontaneous emotion," for this is all brain- distilled. We then break off to hear the life-story of Olivero in Mexico—Naturalism. We return to the cavern-world for the most exciting portion of this strange book, the account of the life, philosophy, theology, and cosmology of the Green People, and this is where, I imagine, Mr. Read really began to enjoy inniself; Hiss conception of a race which moves from plane to plane towards a state of pure mind is itself pure mind, though described with a wonderful, and some- times horrible vividness, and with brilliant detail. Those

sages, with domed pale-green heads, who lose themselves in a cavern in the bowels of the glassy earth, and who die

in thecontemplation of an artificial crystal the beauty of which lies in its relation at a remove to a natural form that it deforms in order to he more absolute in its beauty, calls up an image of some mediaeval scholastic gone mad with mental rarefaction. Never before can an aesthete have so enjoyed himself. It is the mirror of an icily splendid

mind out on holiday, discussing in the forM "of' a fantasy such questions as whether it is the mind or the senses that respond to a work of beauty. I cannot see that the middle, naturalistic portion is welded into the Green •,Child portion, and I fear the aesthete has been inartistic here : but it is a relief and has its own interest. ; •

I often think that when many individualistic books appear simultaneously one should read two together, to keep the balance. A happy corrective for the chilly extravagance of The Green Child is the good-humoured' romanticism of Fate Cannot Harm Me. It is at times so good that one feels Jane Austen could not have done better, and up t6 the end (the last act of a novel is an acid test) it is first class—though of what type or order of fiction it is difficult to say, since Mr. Masterman wobbles consistently between the best of one kind, such as farce, and the best of another kind, such as comedy of manners. His two rival authors,- Bobin Hedley and Basil Faraday Boyne, are really people straight out of the best English tradition of comedy of " humours and with little transformation might have appeared a play by Wycherley or Sedley. The novel follows, indeed, the old way of plot and intrigue, enlivened by verbal wit of the best lcirsi, and its sedentary, donnish air, .its faStidious competence, its rambling way of interlaying • the intrigue with a long and most amusing account of a cricket match; its willingness to pause at any point for. a quotation or a joke, make it an entirely original and personal hook: Who shall marry Cynthia, whether Monty who tells the story over the dinner-table, or his friend back from the Antarctic (fled there until Cynthia shall 'be ripe), or one of the two authors, is of little importance compared with the passing. pageant of characteri, every one 'of whom • is amusing a la Wodehouse, and infinitely more lifelike. With Innocence or Design (reviewed here, July 26th) it is the best comedy I have read in six months.

own kind, in a week, as these two and Mr.-11fasefield's Victoriou$ Troy. It is difficult to be restrained in one's praise of this sea-story, for it moves one'at the same time both to admiration of the writer and enthusiasm for the material : there is both the gift of the person and the gift of the tradition. Off-hand one might. hink That a. story of the dismasting of a ship. in a cyclone and its bringing to port by a boy could be a prosy affair. It could : but when that story roars and smells in every page of the English epic tradition of the sea, the whole thing batters at the emotions with immense power. It is not merely that the image of the wild sea itself is so vivid on every page that one longs to quote and quote and marks so many passages that in the end it is impossible to choose ; or that we get such a sense of the "sacredness of the ship," of the almost-folk-life within it, that the Hurrying Angel becomes a symbol of the vitality of a race : but that, best of all, and in addition to all, these seamen are real men. Those who know that fine book of the late W. P. Ker,, Epic and Romance, will guess the quality of this book when I say that it is just the kind of book he would have loved to quote as a true modern " epic." It contains " great actions in narrative with the persons well defined "--it has " men and dramatic action "- it has " weight and solidity "—like Maldon and The Fight at Finnsburgh it has " men lighting for good reason." Yet it is comprehensive life by reason of its variety of drama and characterisation, and it has the passion that comes out of adniiraLion for heroisM. And being written by a poet it has force apd beauty of image " 'the 'course of time the light grew s) that they could see the sea and marvel..eit it. Though a little lulled by the beating of the rain-squalls, it tags the most frightful sea they had over known . • • Being dim still-it was dark as though dirty and ttodden. All the dirty fturface.was made filthier by seufilings and smearings of tattered foam,. cruddled like old wool. All the raga of newspapers, that a mob will scatter, seemed to have been scattered on the sea and then danced and. trodden on till mess was everywhere . " In their experience they had known th3, power of storms to be associated with order. They had seen the march of the big seas coming like ranges of downland, greyback after greyback, sometimes two miles long, well-aligned, moving to the wind, slipping under the curlings in one direction, and following each other in succession with an arranged space between them, and something like an arrangement in the space between one really big set and another. Now they•looked on a water" that was not only defiled but had gone

That' the men against such a background not only retain their stature but increase it' and become prophetic is inevitable. It is a book that honours the' poet and justifies the Poet Laureate. .

next, which means not as good as it might be—not slick, quick, sweet or acid enough. Its tone and method are all of this

"Evening after evening whorl Netty placed her weary head on her pillow, after the day's work was ended, and the duty-hour in the garden fulfilled (sic) Vera slipped through the garden gate into the arms of the man who now meant life' itself to her."

As the somewhat drab romance of a GerMan refugee in London (it is written by one) it possesses an adventitious interest of a topical nature.

There is a grim reality about LaslCage Down that covers multitude of sins, and makes one wish that Mr. Heslop could hold his craft more firmly - for :though he will possibly never write a bOok that will be satisfactory in a bookish way, he has a sound sense of dramatic action.. But he writes too definitely

fro a PartiSan angle, with a mine-owner who is an out-and- out villain ; a miner who is only saved from being the conven- tional hero. by being stupid and fumbling—a qualification that is becoming a sentimental convention in the proletarian noVel ; bribed Trade Union officials and so , on. One is not surprised' when Jim Cameron, the Miner, after doing six months for threatening the Owner, who has opened up a dangerous scam, recovers his enemy from a seam in which he is himself trapped. But if this invention is somewhat un- original the descriptions of conditions in the mines has its own interest and validity. For these one forgives such trite chapter-openings as "Events moved with a grim rapidity," or " The war was set. The old class enemies were erecting the barriers across the• streets of industry, &c."—examples which .adequately convey the casual style.