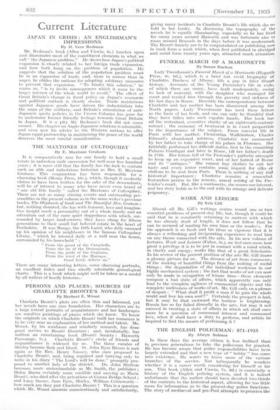 FUNERAL MARCH OF A MARIONETTE - By Susan Buchan Lady'rweedsmuir's Funeral

March of a Marionette (Hogarth Press, 4s. Od.),' which , is a brief but vivid . biography 'of Charlotte, Duchess of Albany, fills a gap in later Stuart history. Accounts of,. the Young Pretender's life in exile, of which there are many, have • dealt inadequately,' owing to lack of material, with the daughter who managed his court and 'tended him through the poverty and sickness Of his last days in Rome. 'Recently the correspondence between Charlotte and her mother has been discovered among the North papers. • Lady Tweedsmuir has used these letters as the basis of her book, and one canOnly 'be -thankful that they have fallen into such capable hands. Her. book has all the restrained, evocative clarity of an eighteenth-century minuet ; ; the economy of treatment is in exact proportion to the importance of the subject. From convent life in Paris with her mother, Clementina -Walkinshaw, Charles Edward's abandoned mistress, Charlotte' was' summoned by her father to take ,charge of his palace in Florence.; She faithfully performed her difficult duties, first in the crumbling Palazzo Guadagni and later, M Rome, till her father's death in 1788. Her letters tell of the Pretender's pathetic attempts to keep up an expensive court, and of . her hatred of Rome and its " antiques." She cannot buy clothes. to snit her taste and every .letter contains 'some request for. silks ,!f* chiffons to be.: sent from Paris. There, IS nothing of 04 rcial historical' importance ; ' Charlotte remains a: somewhat featureless' perAon in the remote, unreal setting of the Pre- tender's eourt. But, like a marionette, she rouses our interest, and her story holds us to the end with its strange and delicate poignancy.