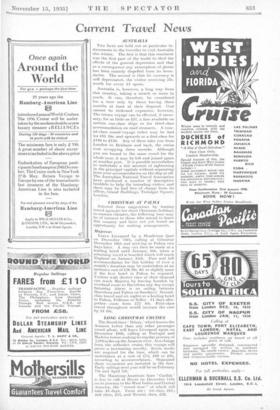 Two facts are held out as particular in- ducements to the traveller to visit Australia this winter. The first is that this continent was the first part of the world to shod the effects of the general depression and that as a consequence any atmosphere of gloom has been entirely dispelled from its boun• &tries. The second is that its currency is still depreciated, the visitor receiving 25s.

Australia is, however, a long way from this country, taking a month or more to reach, It can, therefore, be considered for a tour only by those having three menthe at least at their disposal. Cost cannot be reckoned expensive, however, The return voyage can be effected, if neces- sary, for as little as £57, a fare available on certain one-class ships or for third-class accommodation on mail steamers. A tour- ist-elass round-voyage ticket may be had for £61 10s. and upwards or a first-class for £140 to £150. Any of these take you from London to Brisbane and back, the entire tour occupying three months. : Although you are bound to the same vessel for the whole tour, it may be left and joined again at another port. It is possible nevertheless to undertake a fair amount of sightseeing in the principal capitals without separating from yottr accominodation on the ship at all. The Australian National Travel Association have produced a number of descriptive booklets to help th■i intending.visitor, and these may be had free of charge from its cilolliearliCtrand Buildings, Trafalgar Square, L

Selected from suggestions by leaning travel agencies for short Christmas holidays in warmer climates, the following tour may be of interest to those who intend to leave this country and have not yet found an opportunity for making arrangements.

Majorca: Leave Liverpool by a Henderson liner on December 13th, calling at Gibraltar December 18th and arriving at Palma two days later. A stay can then be made at a loading hotel until January 8th, when a returning vessel is boarded which will reach England on January 15th. Fare and full accommodation for this holiday of over a month's duration may be undertaken at an inclusive cost of £26 16s. 6d. or slightly more if the best hotel in Palma be required. Visitors with shorter time at their disposal can reach Majorca by leaving London by overland route to Barcelona any day except Saturday (there is no sailing between Barcelona and Palma on Sundays). Second- class travel and six nights at a leading hotel in Palma, Pollenza or Soller-11 days alto- gether—costs from £22 108. First-class by £4 o

travel ithsr.oughout would increase the cost

The Booth liner Hilary,' which knows the Amazon better than any other passenger vessel afloat, will leave Liverpool again on December 10th, calling at Portugal and Madeira before making its regular journey of 1,000 miles up the Amazon river. Asa change from the orthodox cruise, this voyage will prove a ,fascinating novelty. Seven weeks are required for the tour, which can be undertaken at a. cost of £75, £80 or £85, rtecording to accommodation. Organised shore excursions are included in the fare. Early sailings next year will be on February 7th and April 7th.