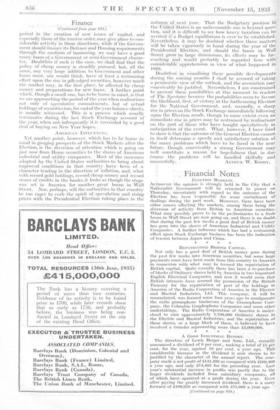 Not only has a good deal of British money gone during the past few weeks into American securities, but some large payments must have been made from this country to America. in connexion with what may be termed the repatriation of British capital. Quite. recently there has been a re-purchase of blocks of Ordinary shares held by America in two important English Electrical Companies, and now it would seem that British' interests have secured the permission of the British Treasury for the repatriation of part of the holdings in America of the Radio Corporation of America. in the 'Electric ' and Musical Industries, Ltd. This company, it will be remembered, was formed some four years ago to amalgamate' the radio' gramophone businesses of the Gramophone Com- pany, the Columbia Graphophone Companies and some other undertakings. The Radio Corporation of America , is under- stood to own approximately 1,700,000 Ordinary shares in the Electric and Musical Industries, and the,:repatriation of these shares, or a large block of them, is believed' to. have involved a transfer representing more than £2,000,000,