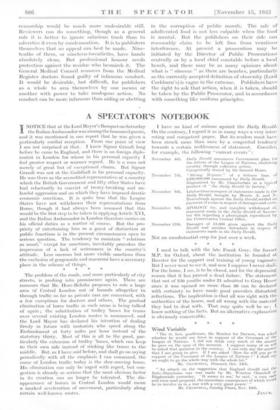 Page 6, 15 November 1935 — The problem of the roads, and more particularly of city
Close

The problem of the roads, and more particularly of city

streets, is pushing into prominence again. There are rumours that Mr. -Hore-Belisha proposes to rule a large area of Central London out of bounds altogether. to, through traffic so far as private cars are concerned, with a few exceptions for doctors and others. The gradual elimination of horse traffic in such areas- is being talked of again ; the substitution of trolley 'buses for trams over several existing London routes is announced, and the Lord Mayor has declared his intention of dealing firmly in future with motorists who speed along the Embankment at forty miles per hour instead of the statutory thirty. Most of this is all to the good, par- ticularly the extension of trolley 'buses, which can keep to their own side instead of sticking like trams to the middle. But, as I have said before, and shall go on saying periodically with all the emphasis I can command, the curse of London traffic today is the slow-moving horse. His elimination can only be urged with regret, but con-, gestion is already so serious that the most obvious factor in its creation can no longer be tolerated. The dis- appearance of horses in Central London would mean a marked acceleration of movement, particularly along certain well-known routes.