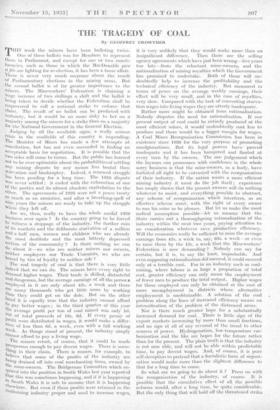 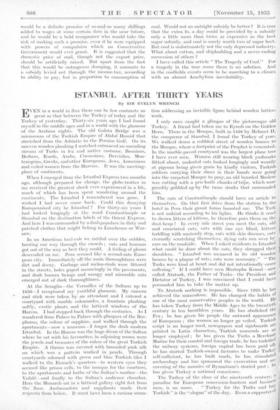 Page 7, 15 November 1935 — THE TRAGEDY OF COAL By GEOFFREY CROWTHER T HIS week the
Close

THE TRAGEDY OF COAL By GEOFFREY CROWTHER T HIS week the

miners have been balloting twice. One of these ballots was for Members to represent them in Parliament, and except for one or two consti- tuencies, such as those in which the MacDonalds pere et fins are fighting for re-election, it has been a tame affair. There is never very much suspense about the result of Parliamentary elections in the mining areas. But the second ballot is of far greater importance to the oliners. The Mineworkers' Federation is claiming a, Wage increase of two shillings a shift and the ballot is being taken to decide whether the Federation shall be eiripowered to call a national strike to enforce that Claim. The result of no ballot can be predicted with certainty, but it would be no more risky to bet on a majority among the miners for a strike than on a majority for the National Government in the General Election.

JUdging by all the available signs, a really serious crisis in the coalfields of this country is impending.. The Minister of Mines has made a few attempts at eonciliation, but has not even succeeded in finding an .acceptable basis for negotiation. It is possible that the two sides will come to terms. But the public has learned rnot to be over optimistic about the probabilities of settling an mining dispute by any means less brutal than starvation and bankruptcy. Indeed, a renewed struggle has been pending for a long time. The 1926 dispute Was never settled ; it ended with the exhaustion of one of the parties and its almost absolute capitulation to the ether. The agreements of 1926 were not a peace treaty ao much as an armistice, and after a breathing-spell of nine years the miners are ready to take 'up the struggle Where they left off. • Are we, then, really to have the whole sordid 1926 business over again ? Is the country going to be forced to witness a stoppage of the industry, the further ruin of its markets and the deliberate starvation of a million and a half men, women and children who are already the most destitute and the most bitterly depressed Eeetion of the community ? Is there nothing we can do about it—we who are neither miners nor owners, rieither employers nor Trade Unionists, we who are bOund by ties of loyalty to neither side ? The real tragedy of coal is that there is very little indeed that we can do. The miners have every right to demand higher wages. Their trade is skilled, distasteful and dangerous, but the average earnings of all the persons employed in it are only about 45s. a week and there are many thousands who get little more by working than they could get on the dole. But on the other band it is equally true that the industry cannot afford tth° pay better wages ; in the third quarter of this year e average profit per ton of coal mined was only ld. out of total proceeds of 13s. 3d. If every penny of profit were distributed in wages, it would make a differ- ence of less than 6d. a week, even with a full working Week. As things stand at present, the industry simply 'cannot afford to pay a living wage. • The :miners retort, of course, that it could be made prosperous enough to pay decent wages. There is some- :thing. in their claim. There is reason; for example, to believe that some of the profits- of the industry are neeng drained off into coal merehanting firms, owned by mine-owners. The Bridgeman • Committee which en- quired into the position in South Wales last year reported that this was sometimes happening, and if it is happening In South Wales it is safe to assume that it is happening elsewhere. But even if these profits were retained in the coalmining industry proper and used to increase wages, it is very unlikely that they would make more than an insignificant difference. Then there are the selling agency agreements which have just been wrung—five years too late—from the reluctant mine-owners, and the nationalisation of mining royalties which the Government has promised to undertake. Both of these will un. doubtedly help to increase the profitability and the technical efficiency of the industry. But measured in terms of pence on the average weekly earnings, their effect will be very small, _and in the case of royalties., very slow. Compared with the task of converting starva- tion wages into living wages they are utterly inadequate.

Rather more might be obtained from rationalisation. Nobody disputes the need for rationalisation. If our present output of coal could be entirely produced at the most efficient mines, it would undoubtedly cost less to produce and there would be a bigger margin for wages: A Coal Mines Reorganisation Commission has been in existence since 1930 for the very purpose of promoting amalgamations. But its legal powers have proved inadequate and it has been hampered and flouted at every turn by the owners., The one judgement which the layman can pronounce with confidenCe in the whole sorry business is that the mine-owners, as a body, have forfeited all right to be entrusted with the reorganisation of their industry. If the nation wants a more efficient mining industry it must do the job itself ; experience has amply shown that the present owners will do nothing whatever to assist, and everything possible to obstruct, any scheme of reorganisation which interferes, as an effective scheme must, with the right of every owner to run his mine as he pleases. But let us make the most radical assumption possible—let us assume that the State carries' out a thoroughgoing rationalisation of the industry within the next two years, paying attention to no consideration whatever save productive efficiency. Will the economies really be sufficient to raise the average earnings from 45s. a week to, say, 65s. a week—or even to raise them by the 12s. a week that the Mineworkers' Federation is now demanding ? Nobody can say for certain, but it is, to say the least, improbable. And even supposing rationalisation did succeed, it could succeed only at a terrible cost. For in an industry such as coal- mining, where labour is so large a proportion of total cost, greater efficiency can only mean the employment of fewer men to produce the total output. Higher wages for those employed can only be obtained at the cost of more unemployment in districts where alternative employment is unobtainable. . A solution of the coal . problem along the lines of increased efficiency means an intensification of the problem of the distressed areas.

Nor is there much greater hope for a substantially increased demand for coal. There is little sigri of the export _markets increasing by more than small fractions, and no sign at all of any reversal of the trend to other sources of power. Hydrogenation, low-temperature car: bonisation and the like are hopes for the future rather than for the present. The plain truth is that the industry is not now able; and will not be able within predictable time, to pay decent wages. Arid, of course, it is pure self-deception to pretend that a Socialistic form of organi- sation would make. more than the slightest difference to that for a long time to come.

So what are we going to do about it ? Press on with the reorganisation of the industry, of course. , It is possible that the cumulative effect of all the possible reforms would, after a long time, be quite considerable. But the only thing that, will hold off the threatened strike would be a definite promise of so-and-so many shillings added to wages at some certain date in the near future, and he would be a bold reorganiser who would take the risk of making such a promise, even if he were equipped with powers of compulsion which no Conservative. Government would ever grant. It is suggested that the domestic price of coal, though not the export price, should be artificially raised. But apart from the fact that this would be outrageous dumping, it amounts to a subsidy levied not through the income-tax, according. to ability to pay, but in proportion to consumption of coal. Would not an outright subsidy be better ? It is true. that the extra 2s. a day could be provided by a subsidy only a little more than twice as expensive as the beet sugar subsidy, and coal is surely worth two of sugar beet. But coal is unfortunately not the only depressed industry., What about cotton, and shipbuilding and a never-ending succession of others ?

I have called this article ". The Tragedy of Coal." • For a tragedy in the true sense there is no solution. And in the coalfields events seem to be marching to a climax with an almost Aeschylean inevitability.