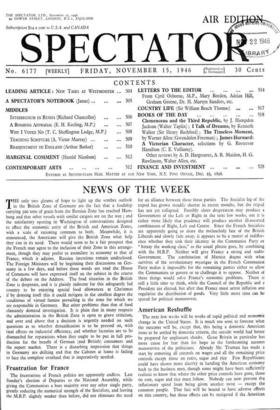 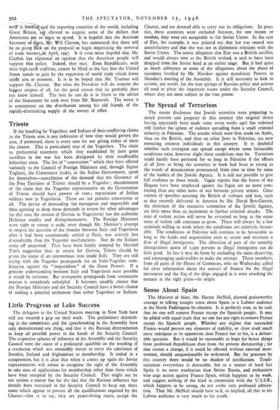 The next few weeks will be weeks of rapid political and economic change in the United States. It is much too soon to forecast what the outcome will be, except that, this being a domestic American issue to be settled by domestic criteria, the outside world had better be prepared for unpleasant shocks. Great Britain in particular has more cause for fear than for hope in the forthcoming autumn manoeuvres of the politicians. Already Mr. Truman has made a start by removing all controls on wages and all the remaining price controls except those on rents, sugar and rice. Few Republicans could have shown more alacrity in handing the American economy back to the business men, though some might have been sufficiently realistic to know that where the other price controls have gone, those on rent, sugar and rice must follow. Nobody can now prevent tbc inflationary spiral from being given another twist — except the common people. That fact will be bound to have adverse effects on this country, but those effects can be mitigated if the American

tariff is loVvere d the exporting countries of the world, including

Great Britain, ant, allowed to acquire some of the dollars that Americans are so e;er to spend. It is hopeful that the Assistant Secretary of Awe, i r. Will Clayton, has announced that there will be no going Wick on the proposal to begin negotiating the removal of trade barriersoiri April, 1947. It is even more hopeful that Mr. Clayton. has expressed an opinion that the American people will support that policy. Indeed, they may. Even Republicans, with their high-tariff tradition, cannot be blind to the fact that the United States stands to gain by the expansion of world trade which lower tariffs aim to promote. It is to be hoped that Mr. Truman will support Mr. Clayton. But what the President will do remains the biggest enigma of all, for the good reason that he probably does not know himself. The best he can do is to listen to the advice of the lieutenants he took over from Mr. Roosevelt. The worst is to concentrate on the distribution among his old friends of the rapidly-diminishing supply of the sweets of office.