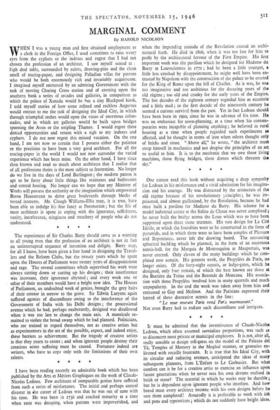 WHEN I was a young man and first obtained employment as a clerk in the Foreign Office, I used sometimes to raise weary eyes from the cyphers or the indexes and regret that I had not chosen the profession of an architect. I saw myself seated at high deal table, surrounded by rulers, drawing-pins and the clean smell of tracing-paper, and designing Palladian villas for patrons who would be both enormously rich and invariably acquiescent. I imagined myself entrusted by an admiring Government with the task of moving Charing Cross station and of creating upon the southern bank a series of arcades and galleries, in comparison to which the palace of Xanadu would be but a tiny Blackpool kiosk, I told myself stories of how some refined and reckless Augustus would entrust to me the task of designing the Ideal City, in which through triumphal arches would open the vistas of enormous colon- nades, and in which art galleries would be built upon bridges spanning the Avon or the stripling Thames. I would regret these denied opportunities and return with a sigh to my indexes and cyphers. I do not now regret this missed vocation. On the one hand, I am not now so certain that I possess either the patience or the precision to have been a very good architect. For all the tracing-paper in the world I would not now surrender the varied experience which has been mine. On the other hand, I have since then known and read so much about architects that I realise that of all professions theirs is the most subject to frustration. No longer do we live in the days of Lord Burlington ; the modern patron is apt to be fussy about little things like staircases and bathrooms and central heating. No longer can we hope that any Minister of Works will possess the authority or the imagination which empowered Baron Haussmann to drive great boulevards through blocks of vested interests. Mr. Clough Williams-Ellis may, it is true, have been able to indulge his fine fancy at Portmerion ; but the life of most architects is spent in coping with the ignorance, selfishness, vanity, interference, stinginess and treachery of people who do not understand.

* * * The experiences of Sir Charles Barry should serve as a warning to all young men that the profession of an architect is not in fact an uninterrupted sequence of invention and delight. Barry may, for all I know, have been given a free hand in designing the Travel- lers and the Reform Clubs, but the twenty years which he spent upon the Houses of Parliament were twenty years of disappointment and rage. The several committees which supervised his work were always cutting down or cutting up his designs ; their interference was incessant, their ignorance abysmal ; and every week one or other of their members would have a bright new idea. The Houses of Parliament, an undoubted work of genius, brought the grey hairs of their creator in sorrow to the grave. Sir Edwin Lutyens again suffered agonies of discomfiture owing to the interference of the Government of India with his Delhi designs ; the processional avenue which he had, perhaps exuberantly, designed was disallowed when it was too late to change the main axis. A monticule re- mained to violate the broad sweep which he had planned. Politicians, who are trained to regard themselves, not as creative artists but as experimenters in the art of the possible, expect, and indeed enjoy, these barriers to achievement. But the tragedy of creative artists is that they yearn to create ; and when ignorant people destroy their creations acute suffering must be caused. Fortunate indeed are writers, who have to cope only with the limitations of their own talents.

I have been reading recently an admirable book which has been published by the Arts et Métiers Graphiques on the work of Claude- Nicolas Ledoux. Few architects of comparable genius have suffered from such a series of misfortunes. The initial and perhaps central disaster in tbe career of Ledoux was that he was out of tune with his time. He was born in 1736 and reached maturity at a time when taste was decaying, when patrons were impoverished, and when the impending tornado of the Revolution caused an archi- tectural hush. He died in 'goo, when it was too late for him to profit by the architectural fervour of the First Empire. His first important work was the pavilion which he designed for Madame du Barry at Louveciennes in 1771 ; had he been a little younger, a little less crushed by disappointment, he might well have been en- trusted by Napoleon with the construction of the palace to be erected for the King of Rome upon the hill of Chaillot. As it was, he was too imaginative and too ambitious for the decaying years of the old regime ; too old and cranky for the early years of the Empire. The last decades of the eighteen century regarded him as eccentric and a little mad ; to the first decade of the nineteenth century he seemed a curious survival from the past. Yet in fact Ledoux should have been born in two, since he was in advance of his time. He was an enthusiast for town-planning, at a time when his contem- poraries were incapable of planning anything ; he believed in rural housing at a time when people regarded such experiments as affected, and he thought in terms of iron when others thought only of bricks and stone. " Above all," he wrote, " the architect must steep himself in mechanics and not despise the principles of an art so useful to him. It is to the mechanic that we owe those living machines, those flying bridges, those domes which threaten the sky."

One cannot read this book without acquiring a deep sympathy for Ledoux in his misfortunes and a vivid admiration for his imagina- tion and his courage. He was distrusted by the aristocrats of the old regime because of his revolutionary principles ; he was im- prisoned, and almost guillotined, by the Revolution, because he had once built a pavilion for Madame du Barry. His scheme for a model industrial centre at the Saline de Chaux was never completed he never built the bridge across the Loue which was to have been supported upon three stone triremes. His vast design for La Cit6 Ideale, in which the foundries were to be constructed in the form of pyramids, and in which there were to have been temples of Pleasure and Repentance, never left the drawing board. The entrancing spherical building which he planned, in the form of an enormous tennis-ball, for the Marquis de Montesquiou at Maupertuis, was never erected. Only eleven of the many buildings which he com- pleted now remain. His greatest work, the Propylees de Paris, no longer exists. Of the forty-eight octrois, or lodge-gates, which he designed, only four remain, of which the best known are those at the Barriere du Trone and the Rotonde de Monceau. His associa- tion with these Propylees 'nvolved him in many quarrels and much unpopularity. In the end the work was taken away from him and entrusted to Gay and Molinos. And the Parisians expressed their hatred of these decorative octrois in the line:

Not even Barry had to endure such discomfiture and intrigues.

* * * It must be admitted that the inventiveness of Claude-Nicolas Ledoux, which often assumed surrialiste proportions, was such as to disconcert most private or municipal employers. It is not, after all, really sensible to design toll-gates on the model of the Palazzo del Te, Temples of Memory in the Moghul manner, or granaries en- livened with rocaille fountains. It is true that his Ideal City, with its circular and radiating avenues, anticipated the ideas of many subsequent planners, from L'Enfant to Le Corbusier. But what comfort can it be for a creative artist to exercise an influence upon future generations when he never sees his own dreams realised in brick or stone? The material in which he works may be durable ; but he is dependent upon ignorant people NA ho interfere. And how bored must every architect become with his own designs before he sees them completed! Assuredly it is preferable to work with ink and pens and typewriters ; which do not suddenly have bright ideas.