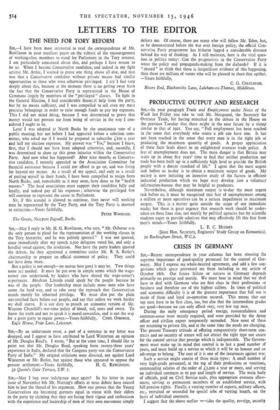 Sm,—By an unfortunate error, a part of a sentence in

my letter was dropped, and I appear to have attributed to Lord Winterton an opinion of Mr. Douglas Read's. I wrote, "But at the same time, I should like to point out that Mr. Douglas Read, speaking from twenty-three years' experience in India, declared that the Congress party was the Conservative Party of India." My original criticisms were directed, not against Lord Winterton or Mr. Butler, but against those who appeared to oppose the