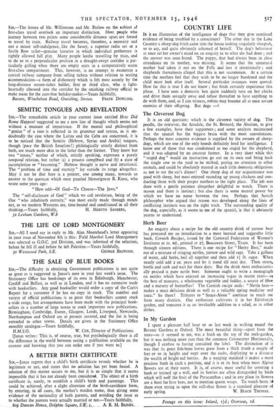 It is an old question: which is the cleverest variety of dog. The poodle, the retriever, the Airedale, the St. Bernard, the Alsatian, to give a few examples, have their supporters ; and some analysts maintained that the spaniel has the biggest brain with the most convolutions. Perhaps the most concrete evidence is supplied by the owners of sheep- dogs, which are one of the only breeds definitely bred for intelligence. I know one of these that was condemned as too stupid for the shepherd, and it was adopted by an amateur farmer. In a very short while this " stupid dog " would on instruction go out on its own and bring back the single cow to the yard to be milked, paying no attention to other animals, and could be absolutely trusted in such little domestic obligations as not to eat the cat's dinner! One sheep dog of my acquaintance was good with sheep, but most enjoyed rounding up young chickens and con- ducting them with their proper mothers to the right place. The job was done with a gentle patience altogether delightful to watch. There is reason and there is instinct ; but also there is some mental power for which we have no name between the two. Perhaps that Scotch philosopher who argued that reason was developed along the lines of conflicting instincts was on the right track. The outstanding quality of the dog, especially, as it seems to me of the spaniel, is that it obviously yearns to understand.