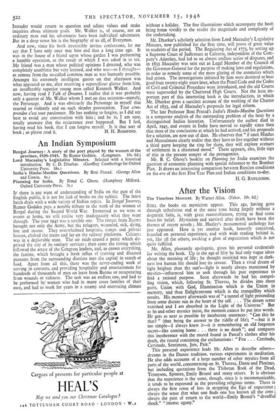 Bengal Journey : A story of the part played by the women of the province, 1939-1945. By Rumer Godden. (Longmans. 10s. 6d.) India's Hindu-Muslim Questions. By Beni Prasad. (George Allen and Unwin. 6s.) IF there is any want of understanding of India on the part of the English public, it is not for lack of books on the subject. The latest batch deals with a wide variety of Indian topics. In Bengal journey, Rumer Godden pays a notable tribute to the work of the women of Bengal during the Second World War. Immersed as we were m events at home, we still realise very inadequately what they went through. The year 1942 was a terrible one. The retreat from Burma brought not only the Army, but the refugees, wounded, sick, dying, lost and insane. They overwhelmed hospitals, camps and private houses, choked the trains and lay on the railway platforms. Calcutta was in a deplorable state. The air raids caused a panic which de- prived the city of its sanitary services ; then came the rioting which followed the arrest of the Congress leaders, and, to crown everything, the famine, which brought a fresh influx of starving and diseased peasants from the surrounding districts into the capital in search of food. Apart from all this, there was the never-ending work of serving in canteens, and providing hospitality and entertainment for hundreds of thousands of men on leave from Burma or recuperating from wounds or sickness. The task was an endless one, and had to be performed by women who had in many cases families of their own, and had to work for years in a steamy and enervating climate

without a holiday. The fine illustrations which accompany the book bring home vividly to the reader the magnitude and complexity of the undertaking.

to students of the period. The Regulating Act of 1773, by setting up a Supreme Court of Judicature at Calcutta, independent of the Com- pany's Adawlats, had led to an almost endless series of disputes, and in 1833 Macaulay was sent out as Legal Member of the Council of the Governor-General for the purpose of making laws and regulations, in order to remedy some of the more glaring of the anomalies which had arisen. The investigations initiated by him were destined to bear good fruit twenty-eight years later, when the Penal Code and the Codes of Civil and Criminal Procedure were introduced, and the old Courts were superseded by the Chartered High Courts. Not the least im- portant part of this interesting book is the introduction, in which Mr. Dharkar gives a succinct account of the working of the Charter Act of 1833, and of Macaulay's proposals for legal reform.

The late Professor Beni Prasad's India's Hindu-Muslim Questions is a temperate analysis of the outstanding problem of the hour by a distinguished Indian historian. Unfortunately the author died in April, 1945, and events in India have moved so rapidly since then that most of the conclusions at which he had arrived, and his proposals for a solution, are now out of date. He observes that " if once Hindus and Mussulmans clearly realise that they have to live together without a third party keeping the ring for them, they will explore avenues of settlement in a chastened mood." There appears, alas, little sign of this in the present temper of the protagonists.

Mr. B. C. Ghose's booklet on Planning for India examines the question of economic planning with special reference to the Bombay Plan. It draws an interesting comparison between Russian conditions on the eve of the first Five Year Plan and Indian conditions to-day.