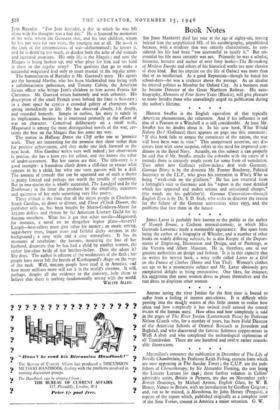 SIR JOHN MAititiorr died last year at the age of eighty-sii, leaving behind him the unpublished MS. of his autobiography, unpublished because, with a modesty that was entirely characteristic, he con- sidered his life had been "too uneventful to justify it." But un- eventful his life most certainly was not. Primarily he was a scholar, historian, lecturer and author of over forty books—The Re-making of Modern Europe and others of his historical works are now classics of their kind. But his imprint on the life of Oxfori was more than that of an intellectual. As a good Reptonian—though he hated his school-days—he was a cricketer above the average. As an idealist he entered politics as Member for Oxford City. As a business man he became Director of the Great Northern Railway. His auto- biography, Memoirs of Four Score Years (Blackie), will give pleasure to many besides those who unavailingly urged its publication during the author's lifetime.

Hannen Swaffer is the English equivalent of that typically American phenomenon, the columnist. And if his influence is not that of a Pearson or a Winchell it is still considerable. At least Mr. Swaffer has no doubts about it. In his new book, What Would Nelson Do ? (Gollancz) there appears on page one this statement: " If this book fails to arouse the conscience of the nation, the war will have been won in vain." This unequivocal assertion, one dis- covers later with some surprise, refers to the need for improved con- ditions in the Royal Navy. Actually, on this subject it can properly be said that if Mr. Swaffei attacks the cobwebs with the caress of a tornado there is certainly ample room for some form of ventilation. Two other new Gollancz yellow-jackets deal with Germany. German Diary is by the dynamic Mr. Fenner Brockway, Political Secretary to the I.L.P., who gives his recreation in Who's Who as being "week-ends on the platform." , He has just returned from a fortnight's visit to Germany and his "report is the most detailed which has appeared and makes serious and sensational charges," (the words are his pub!isher's). German Universities—through English Eyes is by Dr. S. D. Stirk, who seeks to discover the reason for the failure of the German universities since 1933, and the problems that face them in the future.

James Layer is probably best known to the public as the author of Nymph Errant, a Cochran musical-comedy, in which Miss Gertrude Lawrence made a memorable appearance. But apart from being the author of a biography of Whistler, and a number of other books on widely differing subjects, he is also Keeper of the Depart- . ments of Engraving, Illustration and Design, and of Paintings, at the Victoria and Albert Museum. He is, therefore, one of our greatest authorities on design and fashion. It is in this capacity that he writes his newest book, a witty trifle called Letter to a Girl on the Future of Clothes (Home and Van Thal). Women's clothes are apt to be a provocative subject and Mr. Laver obviously gets exceptional delight in being provocative. One likes, for instance, his suggestion that some women dress to please themselves and the rest dress to displease other women

Anyone seeing the river Jordan for the first time is bound to suffer from a feeling of intense anti-climax. It is difficult while peering into the muclily waters of this little stream to realise how often and how completely it has twined itself around the central events of the human story. How often and how completely is told in the pages of The River 7ordan (Lutterworth Press) by Professor Nelson Glueck who, for a number of years, has been Field Director of the American Schools of Oriental Research at Jerusalem and Baghdad, and who discovered the famous Solomon copper-mines in Wadi A:abah and who completed the archmological exploration of all Transjordan. There are one hundred and twelve rather remark- able illustrations.

Macmillan's announce the publication in December of The Life of Neville Chamberlain, by Professor Keith Failing, extracts from which are now appearing in The Sunday Times ; the C.U.P. are the pub- lishers of Chemotherapy, by Sir Alexander Fleming, the text being the Linacre Lecture for 1946 ; three further volumes in Collins' admirable series, Britain in Pictures, are due on November 25th: British Drawings, by Michael Ayrton, English Glass, by W. B. Honey, Nature in Britain, with an introduction by Geoffrey Grigson; and, not to be missed, is Hiroshima, by John Hersey (Penguin), a reprint of the _report which, published originally as a complete issue of the New Yorker, created in America a major sensation. G. W.