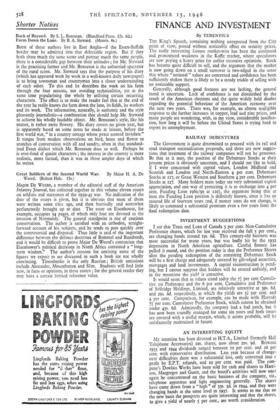 Great Soldiers of the Second World War. By Major H.

A. De Weerd. (Robert Hale. 15s.) MAJOR DE WEERD, a member of the editorial staff of the American Infantry Journal, has collected together in this volume eleven essays on soldiers and statesmen of the 1939-45 war. No indication of the date of the essays is given, but it is obvious that most of them were written some time ago, and then hurriedly and somewhat perfunctorily brought up to date. The essay on Eisenhower, for example, occupies 34 pages, of which only four are devoted to the invasion of Normandy. The general standpoint is one of cautious conservatism. The author is satisfied with an orthodox, straight- forward account of his subjects, and he tends to pass quickly over the controversial and disputed. Thus little is said of the important difference between the defence doctrines of Rommel and Rundstedt, and it would be difficult to prove Major De Weerd's contention that Eisenhower's political decisions in North Africa contained a " long- term wisdom." The author's reasons for omitting some of the figures we expect to see discussed in such a book are not wholly convincing. Timoshenko is the only Russian ; British omissions include Alexander, Mountbatten and Slim. Students will find little new, in facts or opinions, in these essays ; for the general reader they may have a certain limited reference value.