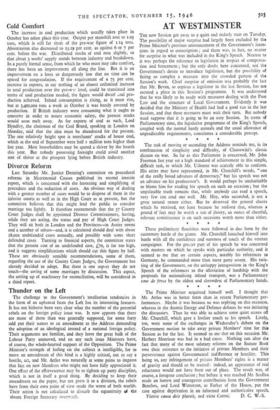 The increase in coal production which usually takes place in October has taken place this year. Output per manshift rose to 1.05 tons, which is still far short of the pre-war figure of 1.14 tons. Absenteeism also decreased to 15.19 per cent. as against 6 or 7 per cent. before the war. Distributed stocks of coal rose slightly, so that about 3 weeks' supply stands between industry and breakdown. In a purely formal sense, from which he who must may take comfort, there has been an improvement all along the line. But it is an improvement on a level so dangerously low that no time can be spared for congratulation. If the requirement of a 75 per cent. increase in exports, to say nothing of an almost unlimited increase in total production over the pre-wqr level, could be translated into terms of coal production needed, the figure would dwarf ..oal pro- duction achieved. Inland consumption is rising, as it must rise, but at 3,492,000 tons a week in October it was barely covered by production. If British industry were consuming what it ought to consume in order to assure economic safety, the present stocks would soon melt away. As for exports of coal as such, Lord Hyndley, the chairman of the Coal Board, speaking in London on Monday, said that the idea must be abandoned for the present. The one relatively bright spot is merchants' stocks of house coal, which at the end of September were half a million tons higher than last year. Most householders may be spared a shiver by the hearth this year. But nobody possessing foresight could avoid another sort of shiver at the prospect lying before British industry.