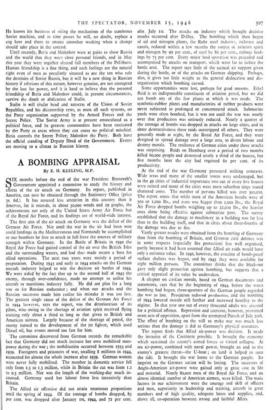 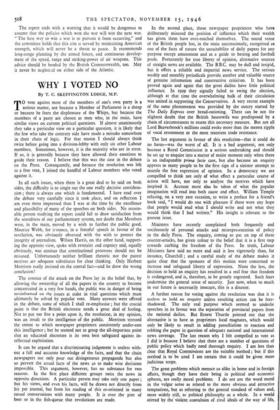 IX months before the end of the war President Roosevelt's 0 Government appointed a committee to study the history and effects of the air attack on Germany. Its report, published in America, can now be obtained through the Stationery Office (price 3s. 6d.). It has aroused less attention in this country than it deserves, for it records, in about 50,000 words and 29 graphs, the achievements not only of the United States Army Air Force but of the Royal Air Force, and its findings are of world-wide interest.

The first aim of the air attack on Germany was the defeat of the German Air Force. Not until the war in the air had been won could landings in the Mediterranean and Normandy be accomplished or our bombers be free to attack in full force the sources of military strength within Germany. In the Battle of Britain in r940 the Royal Air Force had gained control of the air over the British Isles and the surrounding waters, and had thus made secure a base for allied operations. The next two years were mainly a period of preparation. During 1943 and early in 1944 attacks on the German aircraft industry helped to win the decisive air battles of 1944. We were aided by the fact that up to the second half of 1943 the enemy, through over-confidence, made no attempt to utilise his aircraft or munitions industry fully. He did not plan for a long war or for Russian endurance ; and when our attacks and the Russian successes made him realise his mistake it was too late. The greatest single cause of the defeat of the German Air Force in 1944 however, says the report, was the deterioration of its pilots, who owing to the shortage of aviation spirit received flying training only about a third as long as that given to British and American airmen. Largely because of the shortage of petrol, the enemy turned to the development of the jet fighter, which used Diesel oil, but events moved too fast for him.

The committee discovered from German records the remarkable fact that Germany did not much increase her own mobilised man- power during the war ; the mobilisation occurred between 1933 and 1939. Foreigners and prisoners of war, totalling 8 millions in 1944, accounted for almost the whole increase after 1939. German women were never fully mobilised. The number in domestic service fell only from 1.5 to 1.3 million, while in Britain the cut was from 1.2 to 0.5 million. Nor was the length of the working-day much in- creased. Germany used her labour force less intensively than Britain.

The Allied air offensive did not attain, enormous proportions until the spring of 1944. Of the tonnage of bombs dropped, 85 per cent. was dropped after January 1st, 1944, and 72 per cent.

dm July 1st. The attacks on industry which brought decisive results occurred after D-Day. The bombing which then began of oil and nitrogen plants, the Ruhr steel industry, railways and canals, reduced within a few months the output of aviation spirit and nitrogen by 90 per cent., of steel by 8o per cent., railway load- ings by 75 per cent. Every major land operation was preceded and accompanied by attacks on transport, which went far to isolate the battle area. The report says little of the tactical air support given during the battle, or of the attacks on German shipping. Perhaps, also, it gives too little weight to the general dislocation and dis- organisation which bombing caused.

Some opportunities were lost, perhaps for good reasons. Ethyl fluid is an indispensable constituent of aviation petrol, but we did not bomb any of the few plants at which it was made. The synthetic-rubber plants and manufactories of rubber products were never subjected to prolonged or concentrated attack. Submarine yards were often bombed, but it was not until the war was nearly over that production was seriously reduced. Nearly a quarter of the tonnage of bombs was dropped in attacks on large cities, and in sheer destructiveness these raids outstripped all others. They were generally made at night, by the Royal Air Force, and they were designed to spread damage over a large area, to divert labour and destroy morale. The resilience of German cities under these attacks was surprising. Raids on Hamburg over a period of two months killed 6o,000 people and destroyed nearly a third of the houses, but five months later the city had regained 8o per cent, of its productivity.

At the end of the war Germany presented striking contrasts. Wide areas and many of the smaller towns were undamaged, but in the 49 cities of industrial importance two out of every five houses were ruined and many of the cities were mere suburban rings round shattered cores. The number of persons killed was over 300,000. The report states that while most of the American bombs were of 500 or r,000 lbs., and none was bigger than 2,000 lbs., the Royal Air Force dropped bombs weighing up to 22,000 lbs., the heavier ones alone being effective against submarine pens. The survey established that the damage to machinery in a building was far less than to the building itself, and that in cities about three-fourths of the damage was due to fire.

Vastly greater results were obtained from the bombing of Germany than from the bombing of Britain, and German civil defence was in some respects (especially fire protection) less well organised, partly because it had been assumed that Allied air raids would have only a nuisance value. In 1940, however, the erection of bomb-proof surface shelters was begun, and by 1945 they were available for eight million persons. The committee thinks that the black-out gave only slight protection against bombing, but suggests that a critical appraisal of its value be undertaken.

A chapter on civilian morale, based on German documents and statements, says that by the beginning of 1944, before the worst bombing had begun, three-quarters of the German people regarded the war as lost. Pessimism reduced production, and the bombing of 1944 lowered morale still further and increased hostility to the regime. In that year one out of every thousand adults was arrested for a political offence. Repression and coercion, however, prevented overt acts of opposition, apart from the attempted Putsch of July 20th. The effect of bombing on the will to make war was much less serious than the damage it did to Germany's physical resources.

The report finds that Allied air-power was decisive. It made the invasion of the Continent possible. It brought the economy which sustained the enemy's armed forces to virtual collapse. At sea air-power, combined with naval power, brought an end to the enemy's greatest threat—the U-boat ; on land it helped to turn the tide. It brought the war home to the German people. Its imprint on the German nation will be lasting. The successes of Anglo-American air-power were gained only at great cost in life and material. Nearly 8o,000 men of the Royal Air Force, and an almost identical number of American airmen, were killed. The main factors in our achievement were the courage and skill of officers and men, superiority in leadership and training, aircraft in great numbers and of high quality, adequate bases and supplies, and, above all, co-operation between strong and faithful Allies. The report ends with a warning that it would be dangerous to assume that the policies which won the war will win the next war. " The best way to win a war is to prevent it from occurring," and the committee holds that this aim is served by maintaining American strength, which will never be a threat to peace. It recommends long-range planning by the armed forces, and continuous develop- ment of the speed, range and striking-power of air weapons. This advice should be heeded by the British Commonwealth, too. May it never be neglected on either side of the Atlantic.