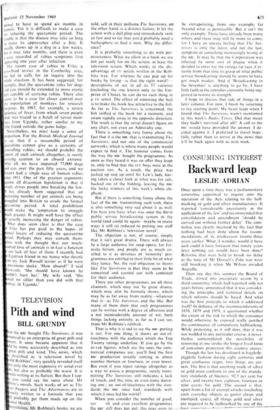 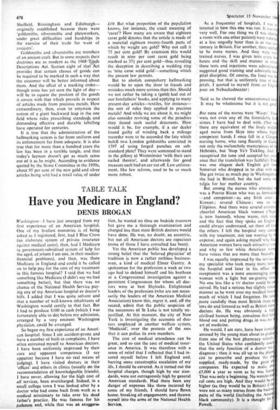 Once upon a time there was a parliamentary committee appointed to inquire into the operation of the Acts relating to the hall- marking of gold and silver manufactures. It reported 'considerable uncertainty in the application of the law' and recommended that consolidation and amendment 'should be carried out without further delay'. The com- mittee was clearly incensed by the fact that nothing had been done about the recom- mendations of its predecessor twenty-three years earlier. What, I wonder, would it have said could it have foreseen that ninety years later nothing yet would have been done? Reforms that were held to brook no delay at the time of Mr Disraeli's Zulu war were still brooking it when Mr Wilson invaded Anguilla.

Then one day this summer the Board of Trade, stirred into precipitate action by a third committee which had reported only ten years before, announced that it was consider- ing the principles and technical details on which reforms should be based. And what was the first principle to which it addressed itself? In defiance of the recommendations of 1856, 1879 and 1959, it questioned whether the extent of the risk to which the consumer would otherwise be exposed really justified the continuance of compulsory hallmarking. While protesting, as it still does, that it was not wedded to any particular course, it never- theless contemplated the possibility of removing at one stroke the longest lived form of consumer protection this country enjoys.

Though the law has developed in higgledy- piggledy fashion during eight centuries and great confusion reigns, two things are cer- tain. The first is that anything made of silver or gold must conform to one of the manda- tory standards of fineness: 92.5 per cent for silver, and twenty-two, eighteen, fourteen or nine carats for gold. The second is that, apart from a list of exempt articles (including such everyday objects as garter clasps and toothpick cases), all things gold and silver are required to be hallmarked by one of the

Sheffield, Birmingham and Edinburgh— originally established because there were 'goldsmiths, silversmiths and plateworkers, under great difficulties and hardships in the exercise of their trade for want of assayers'.

Goldsmiths and silversmiths are members of an ancient craft. But in some respects their doctrines are as modern as the 1968 vTzacle Descriptions Act. Section eight of that- Act provides that certain classes of goods can be required to be marked in such a way that the customer will be better informed about them. And the effect of a marking order— though none has yet seen the light of day— will be to equate the position of the goods it covers with that which prevails in respect of articles made from precious metals. How extraordinary, then, even to entertain the notion of a giant backward leap in the one field where rules prescribing standarsls and demanding effective and durable labelling have operated for centuries.

It is true that the administration of the hallmarking system is far from uniform and its enforcement far from adequate. It is also true that for more than a hundred years the law has been in a terrible tangle, and that today's layman doesn't get as much sense out of it as he might. According to evidence quoted by the Stone Committee in the 1950s, about 95 per cent of the new gold and silver articles being sold had a retail value of under £10. But what proportion of the population knows, for instance, the exact meaning of 'carat'? How many are aware that eighteen carat gold denotes that the article is made of a material eighteen twenty-fourth parts of which by weight are gold? Why not call it 75 per cent gold? By extension this would result in nine per cent carat gold being marked as 37f per cent gold—thus revealing the deception in describing a wedding ring as 'nine carat solid gold'—something which the present law permits.

But to abolish compulsory hallmarking would be to open the door to frauds and mistakes much more serious than this. Should we not rather be taking a (gold) leaf out of our forefathers' books, and applying to many present-day articles—textiles, for instance— the sort of rules they applied to precious metals? And while we are about it, we might also consider reviving some of the penalties they found such useful deterrents. How. would it be, for example, if a car dealer found guilty of winding back a mileage recorder were to be accorded the fate which befell two London goldsmiths convicted in 1597 of using forged punches on sub- standard plate? They were sentenced to stand in the pillory at Westminster 'with their ears nailed thereto', and afterwards for good measure each had an ear cut off. Law enforce- ment, like law reform, used to be so much more robust.