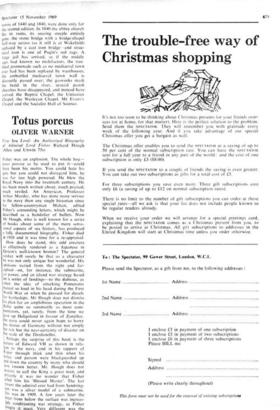 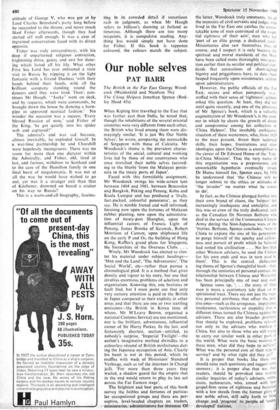 First Sea Lord: An Authorised Biography of Admiral Lord Fisher Richard Hough (Allen and Unwin 75s) Fisher was an explosion. The whole hog— touts porcus as he used to put it--could have been his motto. You could hate his guts but you could not disregard him, he was far too high powered. He blew the Royal Navy into the twentieth century. He has been much written about, much praised, much reviled. An American, Professor Arthur Marder, who has done more service to the navy than any single historian since his fellow-countryman Mahan, edited Fisher's astounding letters, which might be described as a bandolier of bullets. Now Mr Hough, who is well known for a series of books about some of the more sensa- tional aspects of sea history, has produced a fully documented biography. Fisher died in 1920 and it was time for a re-appraisal.

How does he stand, this odd creature so effectively rendered as a Japanese in Epstein's well-known bronze? The general verdict will surely be that as a character he was not only unique but wonderful. His opinions varied from the right and far- sighted—on, for instance, the submarine, air power, and an island war strategy based on a series of landings—to the dubious, as when the idea of attacking Pomerania buzzed so loud in his head during the First World War or when he pressed for diesels for battleship. Mr Hough does not dismiss his plan for an amphibious operation in the Baltic quite so summarily as most corn- ntators, yet, surely, from the time we ve up Heligoland in favour of Zanzibar,

e scale of the Dardanelles.

Perhaps the surprise of this book is the tature of Edward VII as shown in rela- on to the navy, and in his support of iSlier through thick and thin when his °I1L'Y and person were blackguarded up rid down the country by many who should ve known better. Mr. Hough does not sitate to call the King a great man, and nainly it was no wonder that Fisher lied him his 'Blessed Master'. The last resent the admiral ever had from Sandring- T was a silver model of a submarine. is was in 1909. A few years later the treat from below the surface was increas- glY conditioning war strategy, as Fisher gilt it must. Very different was the

attitude of George V. who was got at by Lord Charles Beresford's party long before he succeeded to the throne, and never much liked Fisher afterwards, though they had started off well enough. It was a case of ingrained conservatism faced with its direct opposite.

Fisher was truly extraordinary, with his deep if unpatterned religious conviction, frightening drive, gaiety and zest for danc- ing which lasted all his life. What other First Sea Lord has ever enlivened a state visit to Russia by tripping it on the light fantastic with a Grand Duchess 'with their hands behind their heads, with all the brilliant company standing round the dancers until they were tired. Then', con- tinues Mr Hough, "Jacky" went on deck, and by requests, which were commands, he brought down the house by dancing a horn- pipe in approved nautical fashion.' No wonder the occasion was a success. 'Every blessed Russian of note,' said Fisher of the King, 'he got quietly into his spider web and captured!'

The admiral's end was sad because, almost inevitably, he exploded himself. In a war-time partnership he and Churchill were hopelessly incongruous. There was no room for more than one dictator within the Admiralty, and Fisher, old, tired at last, and furious, withdrew to Scotland and to the care of the Hamilton family in one final burst of megalomania. It was not at all the way he would have wished to go out, yet was it a stranger exit than that of Kitchener, drowned on board a cruiser on his way to Russia?

This is a warts-and-all biography, fascina-

ting in its crowded detail if sometimes rash in judgment, as when Mr Hough refers to Jellicoe's showing at Jutland as timorous. Although there are too many misprints, it is compulsive reading. Any- thing less would simply not have done for Fisher. If this book is tuppence coloured, the colours match the subject.