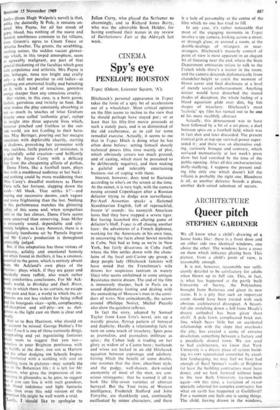 Hitchcock's personal appearance in Topaz takes the form of a spry bit of acceleration out of a wheelchair. Most critical opinion on the film seems to incline to the view that he should perhaps have stayed put ; or at least that his fifty-first movie proceeds at such a stately pace, and is so diminished of the old exuberance, as to call for some remedial exercise. Actually, it seems to me that in Topaz Hitch is doing what he has often done before: setting himself sheerly technical posers (this time mainly of plot, which obviously covers too much ground, and of casting, which must be presumed to be deliberately negative), and then making a guileful and tolerably entertaining business out of coping with them.

Interest, however, does tend to fluctuate according to who's on the screen at the time. At the outset, it is very high, with the camera nosing around Copenhagen after a Russian defector trying to dodge KGB surveillance. Per-Axel Arosenius speaks a flattened Scandinavian English, full of reproachful, frozen 'o' sounds: his nannyish American hosts find they have trapped a severe tiger. But having launched this alluring game of defector's bluff, Topaz is off chasing another hare: the adventures of a French diplomat, working for the Americans in his own time, in uncovering the facts about Soviet missiles in Cuba. Not bad as long as we're in New York, but fairly disastrous in Cuba itself, where the film settles down with the chate- laine of the local anti-Castro spy group, a deep purple lady (Hitchcock fanciers will have noted that the Frenchman's wife throws her suspicious tantrum in watery lilac) who seems embalmed in some antique Resistance movie dream. The end of the film is immensely sharper, back in Paris on a sound diplomatic footing and dealing with the unmasking of Moscow's men in the corri- dors of NATO. Not coincidentally, the actors around (Philippe Noiret, Michel Piccoli) also show the quickest reflexes.

In fact the story, adapted by Samuel Taylor from Leon Uris's novel, sets up a weirdly precise, flytrap pattern of betrayal and duplicity. Hardly a relationship fails to turn on some touch of treachery. Spies pose as journalists, and journalists infiltrate as spies ; the Cuban lady is trading on her glory as widow of a Castro hero ; husbands and wives are locked in an old Hitchcock equation between espionage and adultery. Giving Hitch the benefit of some doubts, one assumes that the slow, absorbent style, and the pudgy, well-shaven, dark-suited anonymity of most of the men, are con- scious stratagems: that he wanted it all to look like fifty-seven varieties of abstract betrayal. But the Toni twins of Western intelligence, Frederick Stafford and John Forsythe, are thanklessly cast, continually outflanked by minor characters; and there

is a hole of personality at the centre of the film which no one has tried to fill.

In any case, it's rather noticeable that most of the engaging moments in Topaz involve-a spy camera, looking across a street, or through glass, or around a room, at the double-dealings of strangers or near- strangers. Hitchcock's masterly control of point of view is most apparent in an elegant bit of finessing near the end, where the State Department emissaries refuse to talk to the French while there's a traitor in the room, and the camera descends diplomatically from chandelier-height to catch the moment of blown cover and final disclosure at a level of merely social embarrassment. Anything noisier would have disturbed the muted shades of deception, the whole feeling of a bland aquarium glide over dim, big fish shapes of treachery. Hitchcock's most 'realistic' spy film has turned out to be one of his most stealthily abstract.

Actually, this denouement was to have been followed by a bit of a set-piece, a duel between spies on a football field, which was in fact shot and later discarded. The present ironical grin at top-spy survival power super- seded it ; and there was an alternative end- ing, curiously brusque and contrary, which surfaced momentarily at last week's press show but had vanished by the time of the public opening. After all this uncharacteristic shilly-shallying, I suppose the present end- ing (the only one which doesn't kill the villain) is probably the right one. Blandness is all, as another defector boards a plane, another dark-suited salesman of secrets.