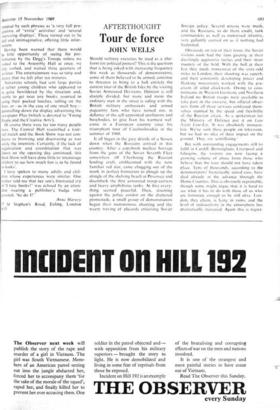 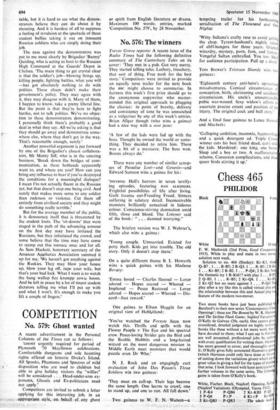 Should military exercises be used as a plat- form for political protest? This is the question that is being asked with increasing frequency this week as thousands of demonstrators, some of them believed to be armed, continue to threaten to bring to a halt entirely the current tour of the British Isles by the visiting Soviet Armoured Divisions. Opinion is still sharply divided, but more and more the ordinary man in the street is siding with the British military enthusiasts and armed pageantry fans who have turned out, in defiance of the self-appointed spoilsports and busybodies, to give Ivan his warmest wel- come in a European country since his triumphant tour of Czechoslovakia in the summer of 1968.

It all began in the grey drizzle of a Sussex dawn when the Russians arrived in this country. After a copybook nuclear barrage from the guns of the Soviet Seventh Fleet somewhere off Cherbourg the Russian landing craft, emblazoned with the now familiar red star, came chugging out of the murk in perfect formation to plough up the shingle of the shelving beach at Pevensey and disembark the first armoured troop-carriers and heavy amphibious tanks. At first every- thing seemed peaceful. Then, straining against the police cordon on the shattered promenade, a small group of demonstrators began their monotonous chanting and the weary waving of placards criticising Soviet foreign policy. Several arrests were made, and the Russians, to do them credit, tank commanders as well as motorised infantry, very gallantly carried on as if nothing had happened.

Obviously on top of their form, the Soviet visitors soon had the fans gasping at their dazzlingly aggressive tactics and their sheer mastery of the field. With the ball at their feet they made mincemeat of the sixty-odd miles to London. their shooting was superb, and their constantly developing pincer and flanking movements worked with the pre- cision of oiled clockwork. Owing to com- mitments in Western Germany and Northern Ireland no British troops were available to take part in the exercise, but official obser- vers from all three services confessed them- selves stunned by the speed and flexibility of the Russian attack. As a spokesman for the Ministry of Defence put it on Late Night Line-Up, *It was absolutely immacu- late. We've seen these people on television, but we had no idea of their impact on the ground. They are scintillating.'

But with outstanding engagements still to fulfil in Cardiff. Birmingham. Liverpool and Glasgow, the visitors are now facing a growing volume of abuse from those who believe that the tour should not have taken place. Tens of thousands, according to the demonstrators' hysterically stated case, have died already in the advance through the Home Counties. This is obviously regrettable, though some might argue that it is hard to see what it has to do with those of us who are fortunate enough to be still alive. Lon- don. they claim, is lying in ruins, and the level of radioactivity in the atmosphere has dramatically increased. Again this is regret-

table, but it is hard to see what the demon- strators believe they can do about it by shouting. And it is hardest of all to suppress a feeling of revulsion at the spectacle of these student bullies taking it out on innocent Russian soldiers who are simply doing their job.

The case against the demonstrators was put to me most clearly by Brigadier 'Barmy' Quisling, who is acting as host to the Russian High Command at the Guards' Depot in Chelsea. `The main thing to get crystal clear is that the soldier's job—blowing things up, killing people, fighting battles, what you will —has got absolutely nothing to do with politics. These chaps didn't make their government's policy. They may agree with it, they may disagree with it. Many of them, I happen to know, take a pretty liberal line. But the point is that they're here to fight battles, not to talk politics. We've no objec- tion to these demonstrators demonstrating.

I personally think there's probably a good deal in what they say. All we're asking is that they should go away and demonstrate some- where else, where they don't get in the way. That's reasonable enough, surely.'

Another powerful argument is put forward by one of the Brigadier's closest collabora- tors, Mr Monty Siff, who is in the catering business. `Break down the bridges of com- munication, as these hotheads apparently want to, and where are you? How can you bring any influence to bear if you've destroyed the conditions for a meaningful dialogue?

I mean I'm not actually fluent in the Russian yet, but that doesn't stop one being civil. And surely that makes more sense to any soldier than rudeness or violence. Cut them off entirely from civilised society and they might do something really terrible.'

But for the average member of the public, it is democracy itself that is threatened by the student louts. The 'sit-downs' that were staged in the path of the advancing armour on the first day may have irritated the Russians, but they infuriated the crowd, and some believe that the time may have come to stamp out this menace once and for all. As Sam Hackett, honorary secretary of the Amateur Apathetics Association summed it up for me, 'We haven't got anything against the Ruskies. They may blow your house up, blow your leg off, rape your wife, but that's your bad luck. What I want is to watch the bang wallop fizz krumpp zowie boom. And be left in peace by a lot of tinpot student dictators telling me what I'll put up with and what I won't. It's enough to make you lift a couple of fingers.'