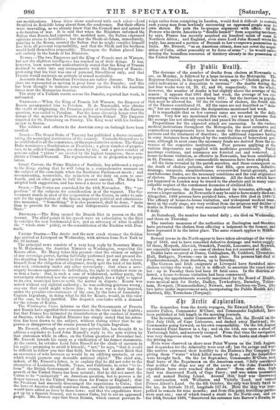 The decrease of the number of deaths from cholera at Newcastle to one, on Monday, is followed by a large increase in the Metropolis. 'The Registrar-General, in his report for last week, says—" Cholera gives-de- cided indications of a disposition to increase" : the deaths during the last four weeks were 16, 29, 47, and 66, respectively. On the whole, however, the number of deaths is but slightly above the average of the season : it appears that 1001 died last week, the average of ten cor- responding weeks over ten years being 952 ; but the increase in popula- , tion must be allowed for. Of the 66 victims of cholera, the South side of the Thames contributed 42. All the cases are not described as "Asia- tic," but are comprised under the designations mentioned last week.

It is remarkable that so few current cases are recorded in the daily papers. Very few are mentioned this week ; yet we may presume that the scourge has not already reached and passed its climax in London. Preparations for the expected attack are unceasing. In the various medical institutions throughout the Metropolis, the most extensive and commodious arrangements have been made for the reception of cholera patients and the treatment of diarrhcea ; the additional expenses having in some instances been defrayed by the contributions of benevolent per- sons, although in most cases the necessary funds are derived from the re- venues of the respective institutions. Poor persons applying at the various dispensaries are supplied with medicines gratuitously. Parish meetings continue, and nuisances are ferreted out and removed. A house-to-house visitation, so effective in Newcastle, has been establithed in St. Pancras; and other commendable measures have been adopted.

All the facts revealed by the parish searches, and those consequent,on the death of cholera patients, show that filth, open sewers, defective drainage, cesspools, slaughterhouses, overcrowded burial-grounds,. and unwholesome trades, are the necessary conditions and the real originators of cholera. The connexion is most intimate. All the deaths which have yet happened in London may be traced to the absolute and in many eases culpable neglect of the commonest decencies of civilized life.

In the provinces, the disease has slackened its intensity, although,it covers a larger surface. At Newcastle it may be said to have nearly diedout. Altogether, 1488 persons have perished here, where 284 died in 188/-'2. The efficacy of house-to-house visitation, and widespread medical treat-

ment in the early stage, are very evident the progress and decline'of deaths in Newcastle : they were successively reduced from 67 to 28(lend 6 daily.

At Gateshead, the number has varied daily ; six died on Wedn and three on Thursday.

The resolute measures of the authorities at Darlington and Stockton have prevented the cholera from effecting a lodgment in the former, and have repressed it in the latter place. The same remark applies to Middle- borough.

Several towns in the North appear to have taken advantage.f the warn- ing of 1849, and to have remedied defective drainage and water-supply. Of these, Morpeth, Alnwick, Ormskirk, Penrith, Lancaster and Berwick, are especially mentioned ; no case of cholera has yet occurred at either. Deaths have occurred at Dunse, Coldingham, St. Cuthbert, llIverstone, Hull, Bathgate, Newton—one in each place. Six persona bed died at Featherstonhaugh, from diarrbcea, up to Saturday.

The German and Irish emigrants at Liverpool have furnished, More cholera victims this week ; but it is difficult to ascertain the exact pi ia- her : up to Tuesday there had been 58 fatal cases. In the districtif„iff- fected, a house-to-house visitation had been commenced. Among the appointments recently sanctioned by the Board of Health, were medical men for Derby, Dudley, Tewkesbury, Barnsley, Totten- ham, Newport, (Monmouthshire,) Newark, and Stockton-on-Tees' (the two latter under improvement acts, incorporating the Public HealthAct,) Dartford, Ely, Tormoham (Torquay).