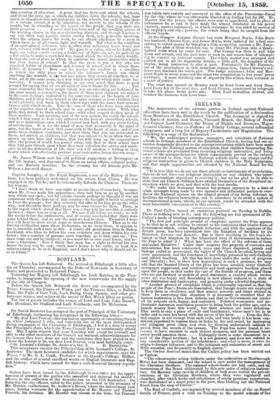 The Queen has left Balmoral. She arrived at Edinburgh a little after six on Thursday, accompanied by the Duke of Newcastle as Secretary of State, and proceeded to Holyrood Palace. Yesterday her Majesty left Edinburgh for Loch Katrine, in the Tros- sachs, to inaugurate the opening of the new waterworks for the supply of the city of Glasgow. Before the Queen left Balmoral she drove out accompanied by the Prince Consort, the Prince of Wales, and the Princess Alice, to Balloch Buie, the Falls of Garr Valt, Loch Bullig, Craig Spanie, and other pic- turesque scenes, and achieved the ascent of Ben Muick Dhui on ponies. The list of guests includes the names of Lord and Lady John Russell, lb. needles]; Sir Stafford and Lady Northcote, and Dr. Robertson.

Sir David Brewster has accepted the post of Principal of the University of Edinburgh, intimating his acceptance in the following letter-

" My dear Lord Provost—Having had an opportunity, of consulting friends on whose judgment I rely, and especially one of the most distinguished living ornaments of the University of Edinburgh, I feel it a duty to accept the Principal's chair, which the Town Council have so unanimously offered me. May I again request that your Lordship will accept for yourself and offer to the other members of the Council my warmest acknowledgments for the honour they have done me and the confidence they have placed in me. I have the honour to be, my dear Lord Provost, ever most faithtailly yours.

This acceptance vacates the Principalship of St. Leonard's College, St. Andrews. The most favoured candidate for which appointment, says the 2Tmes, "is Mr. G. L. Craik, Professor in the Queen's College, Belfast, and the author of several excellent works on English literature and Eng. Bah history, which have earned for him a well-deserved literary reputa- tion."

Orders have been issued by the Edinburgh Crown Office for the appre- hension of several of the parties who essaulted and deforced the sheriff's officers in the collection of the Annuity-tax on the 17th September, On Saturday the city officers, aided by the police, proceeded to the premises of Mr. Hunter, confectioner, St. Andrew's Street, where the deforcement took place, having warrants for the apprehension of Mr. Hunter and Thomas Peacock, his foreman. Mr. Hunter was absent at the time, but Peacock taken into custody and conveyed to the office of the Procurator-Fiscal for the city, where he was afterwards liberated on finding bail for 301. Mr. Hunter was the person the officers were sent to apprehend, and ba place of submission he is said to have made the utmost resistance in his power [namely, passive resistance], in which resistance he was aided by several of his employes and other persons, the result being that he escaped from the officers hands.

At the Glasgow Autumn Circuit last week Margaret Boyle, John Boyle her husband, Charles Kerr, and James Boyle, were indicted for a foul con- spiracy to extort money by bringing a false accusation against a Mr. Pater- son. The plan of these wretches was to decoy Mr. Paterson into a dimly- lighted room when he came for rent. The woman was then to pull him down and scream, and the men were to rush in and accuse him of attempt- ing to commit an indecent assault. The whole matter was arranged and carried out in all its disgusting details, a little girl, the daughter of the Boyles, being instructed to play a part. Fortunately for Mr. Paterson, one of the accomplices in this nefarious transaction, turned Queen's evi- dence and disclosed the whole plot. The Judge sentenced John and Mar- garet Boyle to seven years and the other two conspirators to five years' penal servitude. A more revolting case of depravity has seldom been revealed in a court of justice.

The court was opened on Monday week by Lord Ivory and Lord Dees. Lord Ivory fell ill the next day, and Lord Cowan, summoned by telegraph to take his place, broke down also. Then Lord Ardmillan arrived, and finished the business with Lord Dees,