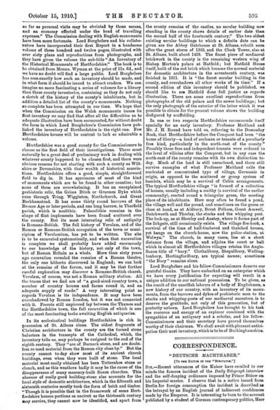 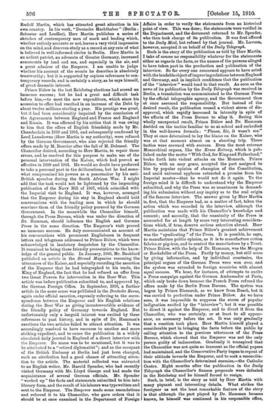 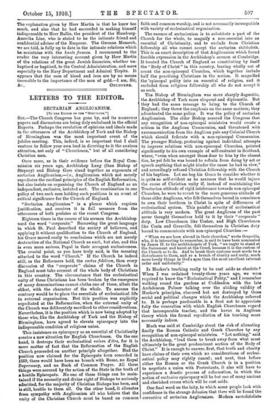 [To THE Eorros OP TEEZ SPEC/1701..1 SIR,—Recent utterances of the Kaiser have recalled to our minds the famous incident of the Daily Telegraph interview and the self-denying ordinance imposed by Prince Billow on his Imperial master. I observe that in a notice issued from Berlin for foreign consumption the incident is described as the betrayal by an English journal of indiscreet confidences made by the Emperor. It is interesting to turn to the account published by a student of German contemporary politics, Herr

Rudolf Martin, which has attracted great attention in his own country. In his work, "Deutsche Machthaber " (Berlin : Schuster and Loeffler), Herr Martin publishes a series of sketches of contemporary men of mark and leading which, whether entirely accurate or not, leaves a very vivid impression on the mind, and deserves study as a record at any rate of what is believed in well-informed circles in Berlin. Herr Martin is an ardent patriot, an advocate of Greater Germany, increased armaments by land and sea, and especially in the air, and a great admirer of the Emperor. I am unable to judge whether his account of the events he describes is absolutely trustworthy ; but it is supported by copious references to con- temporary records, and is certainly a story, as he says himself, of great dramatic interest.

Prince Billow in the last Reichstag elections had scored an immense success ; but he had a great and difficult task before him,—to meet the new expenditure, which since his accession to office had resulted in an increase of the Debt by about twelve millions sterling a year. His prestige was great, but it had been considerably impaired by the conclusion of the Agreements between England and France and England and Russia. It was affirmed by his critics that it was owing to him that the offers of English friendship made by Mr. Chamberlain in 1899 and 1901, and subsequently confirmed by Lord Lansdowne (Herr Martin is my authority), were refused by the German Government, who also rejected the friendly offers made by M. Rouvier after the fall of M. Delcasse. The Chancellor desired, according to Herr Martin, to repair these errors, and he resolved for this purpose to make use of the personal intervention of the Kaiser, which had proved so effective in 1899 and 1901. He would no doubt have preferred to take a personal part in the deliberations, but he had some- what compromised his powers as a peacemaker by his anti- British speeches during the South African War. I might add that the task would not be lightened by the impending publication of the Navy Bill of 1907, which coincided with the Imperial visit to England. It was, however, arranged that the Emperor during his stay in England should bold conversations with the leading men in which he should convince them of the friendly policy pursued by the German Government. In the meanwhile the Chancellor himself, through the Press Bureau, which was under the direction of Dr. Hamman, should influence the English and German Press in the same direction. The Emperor's visit proved an immense success. He duly communicated an account of his conversations with prominent Englishmen in frequent letters and telegrams addressed to Prince Billow, which were acknowledged in laudatory despatches by the Chancellor. It remained to bring these friendly protestations to the know- ledge of the general public. In January, 1908, Mr. Bashford published an article in the Strand Magazine resuming the utterances of the Kaiser, and especially recording the assertion of the Emperor that be had telegraphed to his uncle, the King of England, the fact that he had refused an offer from two Great Powers for intervention in the Boer War. This article was before publication submitted to, and approved by, the German Foreign Office. In September, 1908, a further article in the same sense was published in the Deutsche Revue, again under official sanction, expressly referring to the corre- spondence between the Emperor and his English relations during the Boer War as giving incontrovertible evidence of the friendly policy of Germany towards England. But unfortunately only a languid interest was excited by these references to past history, and in spite of Dr. Hamman's exertions the two articles failed to attract attention. It was accordingly resolved to have recourse to another and more striking expedient, and to cause the publication in a widely circulated daily journal in England of a direct interview with the Emperor. No name was to be mentioned, but it was to be attributed to a "retired diplomatist"; and as the occupant of the British Embassy at Berlin had just been changed, such an attribution had a good chance of attracting atten- tion to the article. The material collected was entrusted to an English writer, Mr. Harold Spender, who had recently visited Germany with Mr. Lloyd George and had made the acquaintance of several German officials. Mr. Spender "worked up" the facts and statements submitted to him into literary form, and the result of his labours was typewritten and sent to the Emperor. The Emperor made some emendations and referred it to his Chancellor, who gave orders that it should be at once examined in the Department of Foreign Affairs in order to verify the statements from an historical point of view. This was done; the statements were verified in the Department, and the document returned to Mr. Spender, who then took charge of its publication. It was first offered to the Daily Mail, but refused by that journal. Mr. Lawson, however, accepted it on behalf of the Daily Telegraph.

Such is the story of the publication as told by Herr Martin. I take of course no responsibility whatever for the statements either as regards the facts, or the names of the persons alleged to have taken part in the production and publication of the interview. So far every one concerned appears to have acted with the laudable object of improving relations between England and Germany, and in implicit confidence that the publication of the " interview " would tend to that result. As soon as the news of its publication by the Daily Telegraph was received in Berlin, a translation was communicated to the German Press by the official telegraphio agency, and the Government thus at once assumed the responsibility. But instead of the desired result, the publication roused a violent storm of dis- approval, which rapidly increased in intensity in spite of the efforts of the Press Bureau to allay it. Seeing this wholly unexpected result, Prince Billow and Dr. Hamman decided on the tactics familiar to us at school and embodied in the well-known formula : "Please, Sir, it wasn't me." They at once determined to lay the blame on the Kaiser, who was at that moment absent on a shooting trip. These tactics were crowned with success. Even the most extreme Monarchical organs, like the Kreuz Zeitung, which is pub- lished under the motto "With God, for King and Fatherland," broke forth into violent attacks on the Monarch. Prince Billow, with an easy grace, accepted the part assigned to him by popular opinion of champion of the Constitution, and amid universal applause extracted a promise from his Imperial master—that he would not do it again. To the foreign mind it is difficult to understand why the Emperor submitted, and why the Press was so unanimous in demand- ing his submission without any inquiry as to the real origin of the famous interview. The answer given by Herr Martin is, first, that the Emperor had, as a matter of fact, taken the action which was recorded in the interview, although the publication was made with his Chancellor's knowledge and consent; and secondly, that the unanimity of the Press is accounted for at length by some very interesting considera- tions which, if true, deserve serious attention abroad. Herr Martin maintains that Prince Billow's greatest achievement was the " syndicating " of the Press. It is possible, he says, to manufacture public opinion, as it is to manufacture cotton fabrics or pig-iron, and to control the manufacture by a Trust. Prince Billow, with the help of Dr. Hamman, was the Morgan or Rockefeller of the Press. Partly by money, but still more by giving information, and by individual courtesies, the principal organs of the German Press were won over, and the system was extended to foreign countries with almost equal success. We hear, for instance, of attempts to excite a Press campaign against the German Ambassador at Paris, which only broke down because the French Press refused the offers made by the Berlin Press Bureau. The system was begun by Prince Bismarck, as we know from Busch, but it was carried to perfection under Prince Billow. As we have seen, it was impossible to suppress the storm of popular indignation excited by the "interview"; but it was possible to direct it against the Emperor, and to divert it from the Chancellor, who was certainly, or at least to all appear- ance, an accessory before the act. It was only gradually that a reaction took place. Herr Martin himself played a. considerable part in bringing the facts before the public by calling attention to the previous utterances of the Press Bureau, which showed that the Emperor was not the only person guilty of indiscretion. Gradually it transpired that the Chancellor was not quite so innocent as the official papers had maintained, and the Conservative Party began to repent of their attitude towards the Emperor, and to seek a reconcilia- tion with the Chancellor's determined enemies,—the Catholic Centre. Eight months after the publication in the Daily Telegraph the Chancellor's finance proposals were defeated in the Reichstag and he himself forced to resign.

Such, in brief, is the story as told by Herr Martin with many piquant and interesting details. What strikes the foreigner as not the least remarkable feature of the story is that although the part played by Dr. Hamman became known, he himself was continued in his responsible office, The explanation given by Herr Martin is that he knew too much, and also that he had succeeded in making himself indispensable to Herr Bailin, the president of the Hamburg- Amerika Line, who is stated to be the intimate friend and confidential adviser of the Emperor. The German Monarch, we are told, is fully up to date in the intimate relations which he-maintains with the haute finance. I recommend to the reader the very interesting account given by Herr Martin of the relations of the great Jewish financiers, whether nn- baptised or baptised, to the Central Administration, and more especially to the Navy Department and Admiral Tirpitz. It appears that the men of blood and iron are by no means insensible to the importance of the men of gold.—I am, Sir,