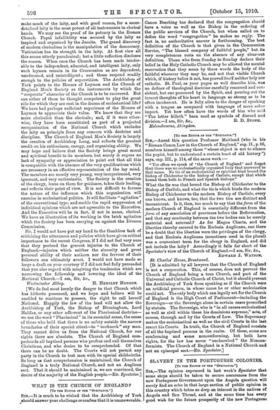 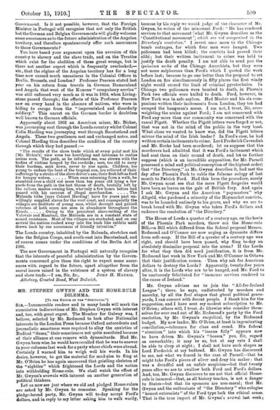 SLIVERY IN THE PORTUGUESE COLONIES.

SIR,—The opinion expressed in last week's Spectator that some steps should be taken to secure assurances from the new Portuguese Government upon the Angola question will surely find an echo in that large section of public opinion in this country which takes so deep an interest in the natives of Angola and San Thome, and at the same time has every good wish for the future prosperity of the new Portuguese Government. Is it not possible, however, that the Foreign Minister in Portugal will recognise that not only the British but the German and Belgian Governments will gladly welcome some assurances as to the future administration of the Angolan territory, and therefore spontaneously offer such assurances to those Governments ?

You have based your argument upon the aversion of this country to slavery and the slave trade, and on the Treaties which exist for the abolition of these great wrongs, but is there not another aspect which is frequently overlooked,— viz., that the regime of the Angolan territory has for a long time now caused much uneasiness in the Colonial Offices in Brussels, and London? Professor Pearson stated last year on his return from travels in German Damaraland and Angola that west of the Kunene • "compulsory service" was still enforced very much as it was in 1854, when Living- stone passed through; the effects of this Professor Pearson saw on every hand in the absence of natives, who were in hiding to escape from the "impoverished and disorderly soldiery." This unrest on the German border is doubtless well known to German officials.

Apparently about 1902 an American miner, Mr. Bicker, was journeying east through the Lunda country whilst Colonel Colin Harding was journeying west through Barotseland and Angola. These two gentlemen met and exchanged notes, and Colonel Harding thus describes the condition of the country through which they had passed :— " The results of the slave trade which at every point met his (Mr. Bicker's] view were too horrifying and inhuman to realise unless seen. The path, so he informed' me, was strewn with the bodies of victims heaped by the roadside ; men, too old to carry their burdens, sank down, never to rise again. Children, too young to endure the heat of the tropical sun, are relieved of their sufferings by a stroke of the slave driver's axe, their flesh left as food

for hungry wolves When once returning from a walk, he stumbled over a child not more than ten years old lying a few yards from the path in the last throes of death, brutally left by the callous master owning him, who'only a few hours before had passed with his caravan of illegal merchandise. . . . . The Malunda tribe [says Colonel Harding] have for years past un- willingly supplied slaves for the west coast, and consequently the villages are destitute of young men, whilst decrepit and palsied veterans of both sexes are seen in abundance throughout the Kraals Owing to the persistent slave-raiding of the Valovale and Manahan, the Malunda are in a constant state of armed resistance. Most of the villages are stockaded, and on our arrival the natives rushed away into the bush like rabbits until drawn back by our assurances of friendly intention."

The Lunda country, inhabited by the Balunda, stretches east into the Belgian Congo, and south-east into Barotseland, and of course comes under the conditions of the Berlin Act of 1885.

The new Government in Portugal will naturally recognise that the interests of peaceful administration by the Govern- ments concerned give them the right to expect some assur- ances with regard to the future, apart altogether from the moral issues raised in the existence of a system of slavery and slave trade.—I am, Sir, Jonx H. HABras.