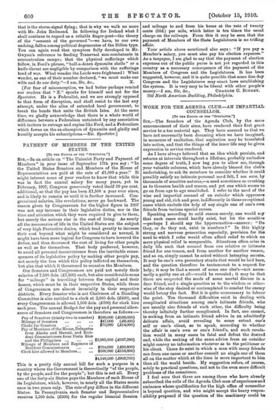 PAYMENT OF MEMBERS IN THE UNITED STATES.

[To TEE EDITOR OF THE " SFECTATOR.'"] S/R,—In an article on "The Unionist Party and Payment of Members" in your issue of September 17th you say : "In the United States Senators and Members of the House of Representatives are paid at the rate of 21,000 a year." It might interest some of your readers to know that while this was in fact the annual salary for many years, yet in February, 1907, Congress generously voted itself 50 per cent. additional, so that the pay has been 21,500 a year ever since, and is likely to remain so until it is further increased. Con- gressional salaries, like revolutions, never go backward. The reason given by Congressmen for the higher figure in 1907 was not any increase in their legislative duties, nor in the time and attention which they were required to give to them, but merely the serious rise in the cost of living. As nearly all the necessaries of life in the United States are the subject of very high Protective duties, which tend greatly to increase their cost beyond what might be considered as normal, it might have been more logical for Congress to have lowered the duties, and thus decreased the cost of living for other people as well as for themselves. That body preferred, however, to avoid all personal inconvenience from the inevitable conse- quences of its legislative policy by making other people pay, not merely the loss which this policy inflicted on themselves, but also that which it threatened to occasion the Members.

Our Senators and Congressmen are paid not merely their salaries of 7,500 dole. (£1,500) each, but also considerable sums for " mileage " in travelling between the capital and their homes, which must be in their respective States, while those of Congressmen are almost invariably in their respective districts. Every Senator who is not Chairman of a Standing Committee is also entitled to a clerk at 2,000 dole. (2400), and every Congressman is allowed 1,500 dole. (2300) for clerk hire each year. The annual Budget for the pay and personal allow- ances of Senators and Congressmen is therefore as follows :— Pay of Senators (ninety-two in number) $690,000 (8138,000)

Pay of Members of the House, Delegates from Alaska and Hawaii, and Resi- dent Commissioners from Porto Rico

Mileage of Members and Expenses of

$4,548,500 (.C909,700) This is a pretty tidy annual bill for such a purpose in a country where the Government is theoretically "of the people, by the people, and for the people"; but this is not all. Every one of the forty-six States pays the Members of each House of its Legislature, which, however, in nearly all the States meets once in two years only. The rate of pay differs in the different States. In Pennsylvania each Senator and Representative receives 1,500 dole. (E300) for the regular biennial Session and mileage to and from his home at the rate of twenty cents (10d.) per mile, which latter is ten times the usual charge on the railways. From this it may be seen that the payment of Members of the State Legislatures is no trifling affair.

Your article above mentioned also says : "If you pay a Member's salary, you must also pay his election expenses." As a taxpayer, I am glad to say that the payment of election expenses out of the public purse is not yet regarded in this country as a necessary consequence of the payment of the Members of Congress and the Legislatures. It has been suggested, however, and it is quite possible that some fine day Congress and the Legislatures may enact laws establishing the system. It is very easy to be liberal with other people's