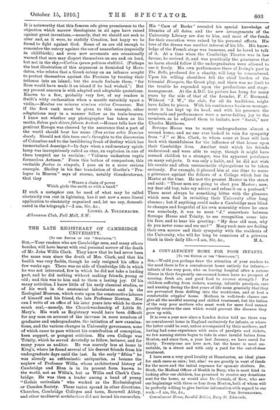 THE LATE REGISTRARY OF CAMBRIDGE UNIVERSITY.

[TO THE EDITOR OF THE "SPECTATOR."1

SIR,—Your readers who are Cambridge men, and many others besides, will have learnt with real personal sorrow of the death of Mr. John Willis Clark. They knew that he had never been the same man since the death of Mrs. Clark, and that his health was very feeble, though he only resigned his office a few weeks ago. There was no side of Cambridge life in which he was not interested, few in which he did not take a leading part, and he did nothing without making friends, young or old; and this was to him and to them a lasting joy. Of his many activities, I know little of his early classical studies, or of his work in the anatomical laboratories and in the Zoological Museum, which rests upon the constructive labours of himself and his friend, the late Professor Newton. Nor can I write of an office of his later years into which he threw much zeal,—namely, the Churchwardenship of Little St. Mary's. His work as Registrary would have been difficult for any man on account of the increase in mere numbers of -graduates and undergraduates, the initiation of new examina- tions, and the various changes in University governance, none of which came to pass without his contribution of conception, keen support, or pungent criticism. His own College was Trinity, which he served devotedly as fellow, lecturer, and for many years as auditor. He was scarcely less at home in King's, where he found several of his dearest friends from his undergraduate days until the last. In the early " fifties " he was already an enthesiastic antiquarian, as became the nephew of Professor Willis, whose architectural history of Cambridge and Eton is in its present form known to the world, not as Willis's, but as Willis and Clark's Cam- bridge. He was then a leader among a band of young "Gothic revivalists" who worked as the Ecelesiological or Camden Society. These tastes spread in other directions. Churches, Cambridge Colleges and town, Barnwell Abbey, and other mediaeval architecture did not bound his researches. His "Care of Books" revealed his special knowledge of libraries of all dates, and the new arrangements of the University Library are due to him, and most of the funds for their execution were raised by his personal efforts. His love of the drama was another interest of his life. His know. ledge of the French stage was immense, and he loved to talk of it. At a time when the Cambridge Theatre was in low favour, he revived it, and was practically the guarantor that no harm should follow if the undergraduates were allowed to use it freely. His own performance there of Irving's part in The Bells, produced for a charity, will long be remembered. Upon his willing shoulders fell the chief burden of the triennial Dionysia, the Greek play, and there was no limit to the trouble he expended upon the productions and stage- management. At the A.D.C. his picture has hung for many

years by the side of that of the founder, Burnand. Without "J. W.," the club, for all its traditions, might have fallen to pieces. With his continuous business manage- ment it has kept up its head, and with his presence the rehearsals and performances were a never-failing joy to the members, as he adjured them to imitate, now "Sarah," now Charles Matthews.

Scroope House was to many undergraduates almost a second home; and no one ever looked in vain for sympathy Irons "3." or Mrs. Clark, to whom some at least will look back with thankfulness for the influence of that house upon their Cambridge lives. Another trait which his friends understood- and were able to enjoy, though it might have seemed childish to a stranger, was his apparent petulance on many subjects. It was only a habit, and he did not wish his caustic and often unreasonable objurgations to be taken seriously. For example, it pleased him at one time to nurse a grievance against the fellows of a College which lost its Master at the time. He met the present Master in the street and said : "Those men are going to elect you Master; now, my dear old boy, take my advice and refuse it on a postcard." There must always be something bitter with the pleasure which men find in revisiting their University after long absence ; but if anything could make a Cambridge m-an blind to changes and forgetful of his own nonentity where he once was somebody, it was to meet "J." somewhere between Scroope House and Trinity, to see recognition come into his face, and to hear his greeting: "My dear old man, why do you never come and see me ? " Many such men are feeling their own sorrow and their sympathy with the residents of the University, who will for long be conscious of a grievous