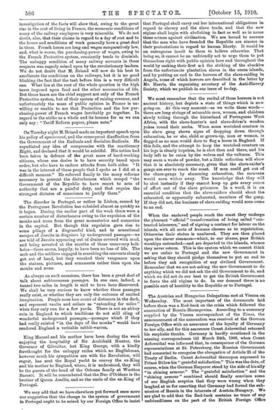 Page 2, 15 October 1910 — When the enslaved people reach the coast they undergo the
Close

When the enslaved people reach the coast they undergo the

pleasant " official " transformation of being called "con- tracted labourers," and of signing a contract for labour on the islands, with all sorts of humane clauses as to repatriation. Otherwise their status is unaltered. They are then placed upon the slaver steamers—which, to our shame, pass British warships untouched—and are deported to the islands, whence they never return. This is the system which we cannot think we are unfair to Portugal and the new Government in asking that they should pledge themselves to put an end to before they ask recognition of any civilised Government. Remember that we are not asking the new Government to do anything which we did not ask the old Government to do, and which we did not do our best to get the British Government to force the old regime to do. In our demand there is no possible sort of hostility to the Republic or to Portugal.