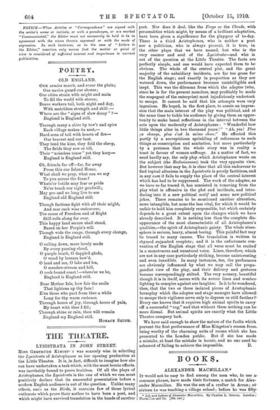 Miss GERTRUDE KING8Tc N was scarcely wise in selecting the Lysistrata of Aristophanes as her opening production at the Little Theatre. It is, in fact, difficult to imagine how she can have undertaken a task which, with the most heroic efforts, was inevitably bound to prove fruitless. Of all the plays of Aristophanes, the Lysistrata is the one of which we can most positively declare that its successful presentation before a modern English audience is out of the question. Unlike many others, such as the Birds, it contains few of those lyrical outbursts which prove their author to have been a poet, and which might have survived translation in the hands of another poet. Nor does it deal, like the Frogs or the Clouds, with personalities which might, by means of a brilliant adaptation, have been given a significance for the playgoer of to-day. There is a third Aristophanes, who is neither a poet. nor a politician, who is always present, it is true, in. the other plays that we have named, but who is' the very essence and soul of the Lysistrata—and who is out of the question at the Little Theatre. The facts are perfectly simple, and one would have expected them to be obvious. The whole of the cehtral plot, and the great majority of the subsidiary incidents, are far too gross for the English stage ; and exactly in proportion as they are watered down, the performance becomes unintelligible and inept. This was the dilemma from which the adapter (who, since he is for the present nameless, may profitably he made the scapegoat of the enterprise) most injudiciously undertook to escape. It cannot be said that his attempts were very ingenious. He hoped, in the first place, to create an impres- sion that the main interest of the play was political, and at the same time to tickle his audience by giving them an oppor- tunity to make banal reflections in the interval between the acts upon the modernity of Aristophanes : "Wonderful how little things alter in two thousand years !" "Ali, yes ! Plus ca change, plus c'est la meme chose." He effected this partly by a surreptitious sprinkling of references to such things as conscription and sanitation, but more particularly by a pretence that the whole story was in reality a tract in favour of woman suffrage. As a matter of fact, we need hardly say, the only play.which Aristophanes wrote on the subject (the Bcclesiazusae) took the very opposite view. But however that may be, it is clear that all this endeavour to find topical allusions in the Lysistrata is purely factitious, and in any case it fails to supply the place of the central interest which has had to be suppressed. The work of the adapter, as we have so far traced it, has consisted in removing from the play what is offensive in the plot and incidents, and intro- ducing into it a new political motif and some new political jokes. There remains to be mentioned another alteration, more intangible, but none the less vital, for which it would be unfair to hold him completely responsible, but which certainly depends to a great extent upon the changes which we have already described. It is nothing less than the complete dis- appearance of the most characteristic of all Aristophanes's qualities,—the spirit of Aristopharic gaiety. The whole atmo- sphere is serious, heavy, almost boring. This painful fact may be traced to many causes. The tra.uslation is written in rhymed enjambed couplets ; and it is the unfortunate con- vention of the English stage that all verse must be recited' in a monotonous and unnatural voice. Lines, therefore, which are not in any case particularly striking, become uninteresting and even inaudible. In many instances, too, the performers, are obviously influenced by what we may call the propa- gandist view of the play, and their delivery and gestures. becomecorrespondingly stilted. The very scenery, beautiful though it is in itself, seems with its severe lines and snmbre- lighting to conspire against our laughter. Is it to be wondered, then, that the two or three isolated pieces of Aristophanic horseplay which the adapter and stage manager have allowed! to escape their vigilance serve only to depress us still further F4 Every one knows that it requires high animal spirits to carry- off a successful "rag," and that without them nothing can be. more dismal. But animal spirits are exactly what the Little. Theatre company lack.

We have said enough to show the nature of the faults which prevent the first performance of Miss Kingston's season front. being worthy of the charming suite of rooms which she has- presented to the London public. But if she has made a mistake, at least the mistake is heroic, and no one need be.

ashamed of failing to achieve the impossible. B.