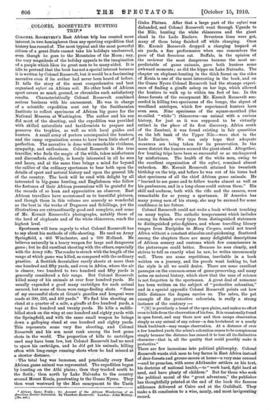 created more interest intwo heraiepheres than any sporting expedition that history baarecoadot The most typical and the most powerful citizen of .a great State cannot take his holidays unobserved, even,. theugh he goes to the Mountains of the Moon ; nay, the very magnitude a the holiday appeals to the imagination of a people which likes its great men to be many-sided. It is idle to pretend that the book has not a special interest because it is written by Colonel Roosevelt, but it would be a fascinating narrative even if its author had never been heard of before. It tells the story of the most comprehensive and best organised safari on African soil. No other book of African sport covers so much ground, or chronicles such satisfactory results. Characteristically Colonel Roosevelt combined serious business with his amusement. He was in charge of a scientific expedition sent out by the Smithsonian Institute to colleet specimens of African big game for the National Museum at Washington. The author and his son did most of the shooting, and the expedition was provided With skilled naturalists and taxidermists to prepare and preserve the trophies, as well as with local guides and hunters. A small army of porters accompanied the hunters, and the Camp organisation seems to have been little short of perfection. The narrative is done with remarkable vividness, Sympathy, and enthusiasm. Colonel Roosevelt is the true traveller; who feels the magic of the wilds, takes misfortunes and distomforta cheerily, is keenly interested in all he sees and hears, and at the same time brings a mind far beyond the calibre of the ordinary sportsman to bear both upon the details of sport and natural history and upon the general life of the country. The book will be read with delight by all interested in big-game hunting, and Englishmen who follow the fortunes of their African possessions will be grateful for the records of so keen and appreciative an observer. East African travellers have accustomed us to beautiful pictures, and though those in this volume are scarcely so wonderful as the best in the Works of Dugmore and Schillings, yet the illustrations are extraordinarily good and complete, and some of Mr. Kermit Roosevelt's photographs, notably those of the herd of elephants and of the white rhinoceros, reach the highest level.

-Sportsmen will turn eagerly to what Colonel Roosevelt has to say about his methods of rifle-shooting. He used an Army Springfield, a .405 -Winchester, and a '500 Holland. He believea naturally in a heavy weapon for large and dangerous game; but he did excellent shooting with the others, especially with the Ariny rifle: The reader is struck with the length of the range at which game was killed, as compared with the ordinary practice. A Scottish deerstalker rarely shoots at more than one hundred and fifty yards, and even in Africa, where the air is clearer, two hundred to two hundred and fifty yards is generally considered a fair range. But Colonel Roosevelt killed many of his animals at over four hundred yards. He usually expended a good many cartridges for each animal secured, but some of them were range-finding shots. "Some of my snecessfulahots at Grant's gazelles and kongoni were made at 300, 350, and 400 yards." We find him shooting an eland at a quarter of a mile, a giraffe at five hundred yards, a topi at five hundred and twenty yards. He kills a saddle- billed stork on the wing at one hundred and eighty yards with theSpringfield, and with the same small weapon be brings down a.galloping. eland at one hundred and eighty yards. This represents some very fine shooting, and Colonel Roosevelt and his son must rank among the best game shots in-the world. The proportion of kills to cartridges used may have ;been low, but Colonel Roosevelt had no need to•nre his cartridges, and he did get his animals, killing often with long-range running shots when he had missed at

The total' bag was immense, and practically every -East African gall* animal was represented. The expedition began * hunting -on the Athi plains; then -they tracked south to the Sotik; then north by Lake Naivrtslut to the country around Mount Xenia, penetrating to the Guaso Nyero. They then went westward by the Man escarpment to the Uasin * African Game 7'rads the Account of the African Wanderings of an American Nwater-Naturedist. By Theodore Eomerelt. London John Murray. DEL net.]

Gishu Plateau. After that a large part of the safari was disbanded, and Colonel Roosevelt went through Uganda to the Nile, hunting the white rhinoceros and the giant eland in the Lado Enclave. Seventeen lions were got, many of them being finished off while charging. Once Mr. Kermit Roosevelt dropped a charging leopard at

six yards, a fine performance when one remembers the pace of that ferocious cat. Buffalo, in the opinion of

the reviewer the most dangerous because the most un- predictable of game animals, gave both hunters some awkward moments ; as did the hippo on Lake Naivasha. The chapter on elephant-hunting in the thick forest on the sides of Kenia is one of the most interesting in the book, and on the Guaso Nyero Colonel Roosevelt had the strange experi- ence of finding a giraffe asleep on her legs, which allowed

the hunters to walk up to within ten feet of her. In the dense forests of the escarpment Mr. Kermit Roosevelt suc-

ceeded in killing two specimens of the bongo, the shyest of woodland antelopes, which few experienced hunters have even seen. Nine specimens of the square-mouthed (the so-called "white ") rhinoceros—an animal with a curious history, for just as it was supposed to be virtually extinct in the place of its first discovery, Africa south of the Zambezi, it was found existing in fair quantities on the left bank of the Upper Nile—were shot in the Ledo Enclave. We can only hope that adequate measures are being taken for its preservation. In the same district the hunters secured the giant eland. Altogether, few bunting trips have been so successful or so unchequered by misfortunes. The health of the white men, owing to the excellent organisation of the safari, remained almost unbroken. Mr. Kermit Roosevelt attained his twentieth birthday on the trip, and before he was out of his teens had shot specimens of all the chief African game animals. He "learned to see game and to follow tracks almost as well as- his gunbearers, and in a long chase could outrun them." His skill and coolness, both with the rifle and the camera, were remarkable for so young a sportsman. If America has many young men of his stamp, she may be excused for some confidence in her future.

Colonel Roosevelt could not write a book without touching on many topics. The catholic temperament which includes among its friends every type from distinguished statesmen to distinguished prize-fighters, and whose travelling library ranges from Euripides to Many Cargoes, could not travel Africa without a constant stimulus and quickening. Scattered among the chapters there are many delightful descriptions of African scenery and customs which few connoisseurs in the picturesque could better. Because he sees clearly, and strives to tell us exactly what he saw, he writes uncommonly well. There are some repetitions, inevitable in a book written on a journey, and the proofs want looking to, but the style is all we could desire. There are some excellent passages on the common-sense of game-preserving, and many notes on natural history, which show that the man of science is not forgotten in the sportsman. A great deal of nonsense has been written on the subject of "protective coloration," and in a special appendix Colonel Roosevelt points out how little distance the dogma carries us. The zebra, the pet example of the protective colourists, is really a strong instance of the contrary :— " [It] is peculiarly a beast of the open plains, and makes no effort even to hide from the observation of his foes. It is occasionally found in open forest, and may there now and then escape observation

simply as any animal of any colour—a dun hartebeest or a nearly black bnshbuck—may escape observation. At a distance of over a few hundred yards the zebra's coloration ceases to be conspicuous simply because the distance has caused it to lose all its distinctive character—that is, all the quality that could possibly make it protective."

There are few incursions into political .philosophy. Colonel. Roosevelt wantazich men to buy farms in Beat Africa instead-

of deer-forests and grouse-moors at home--a very sane counsel —and he preaches, with some Afrikander, settlers as his, text, his doctrine of national health,—to ".work hard, fight hard at need, and have plenty of children." But for those who seek the political moral of the "great adventure," the publisher. has thoughtfully printed at the end of the book the famous

addresses delivered at Cairo and at the Guildhall. They.. make a fit conclusion to a wise, manly, and most invigorating, record.