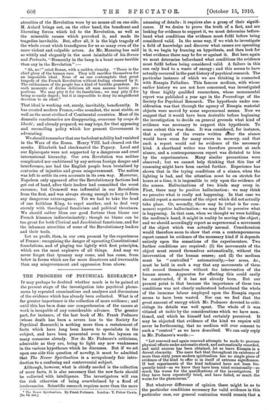 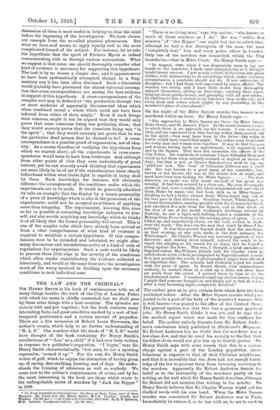 THE PROGRESS OF PSYCHICAL RESEARCH.*

IT may perhaps be doubted whether much is to be gained at the present stage of the investigation into psychical pheno- mena by repeated examinations and analyses and discussions of the evidence which has already been collected. What is of far greater importance is the collection of more evidence ; and until this has been done our comprehension of the causes at work is incapable of any considerable advance. The greater part, for instance, of the last book of Mr. Frank Podmore (whose death has been a severe loss to the Society for Psychical Research) is nothing more than a restatement of facts which have long been known to specialists in the subject, and have been presented even to the layman on many occasions already. Nor do Mr. Podmore's criticisms, admirable as they are, bring to light any new weaknesses in the various hypotheses which he discusses. But if we set upon one side this question of novelty, it must be admitted that The Newer Spiritualism is a scrupulously fair intro- duction to a confusing and controversial subject.

Although, however, what is chiefly needed is the collection of more facts, it is also necessary that the new facts should be collected with intelligence. The investigators will run the risk otherwise of being overwhelmed by a flood of irrelevancies. Scientific research requires more than the mere

amassing of details : it requires also a grasp of their signifi- cance. If we desire to prove the truth of a fact, and are looking for evidence to support it, we must determine before- hand what conditions the evidence must fulfil before being considered valid. In the same way, if we wish to investigate a field of knowledge and discover what causes are operating in it, we begin by framing an hypothesis, and then look for what evidence there may be for or against it. But here again we must determine beforehand what conditions the evidence must fulfil before being considered valid. A failure in this can only lead to a waste of energy; and this seems to have actually occurred in the past history of psychical research. The particular instance of which we are thinking is connected with Eusapia Palladino. This famous medium, with whose earlier history we are not here concerned, was investigated by three highly qualified researchers, whose monumental report was published a year ago in the Proceedings of the Society for Psychical Research. The hypothesis under con- sideration was that through the agency of Eusapia material objects were moved by some supernormal means. Now we suggest that it would have been desirable before beginning the investigation to decide on general grounds what kind of evidence was necessary to support this hypothesis. To some extent this was done. It was considered, for instance, that a report of the events written atter the seance would leave room for many errors in memory, and that such a report would not be evidence of the necessary kind. A shorthand writer was therefore present at each seance, and a contemporaneous report was dictated to him by the experimenters. Many similar precautions were observed ; but we cannot help thinking that this line of reasoning might have been carried further. Experience has shown that in the trying conditions of a seance, when the lighting is bad, and the attention must be on stretch for hours at a time, it is impossible to rely upon the evidence of the senses. Hallucinations of two kinds may creep in. First, there may be positive hallucination : we may think we perceive what is really not happening. In that case we should report a movement of the object which did not actually take place. Or, secondly, there may be (what is far com- moner) negative hallucination: we may fail to perceive what is happening. In that case, when we thought we were holding

the medium's hand, it might in reality be moving the object; and we should accordingly report as supernormal a movement of the object which was actually normal. Consideration would therefore seem to show that even a contemporaneous report cannot be evidence of the necessary kind if it depends entirely upon the sensations of the experimenters. Two further conditions are required: (1) the movements of the object must record themselves automatically, without the intervention of the human senses ; and (2) the medium must be " controlled " automatically,—her arms, dm, must be held in such a way that any movements of them

will record themselves without the intervention of the human senses. Apparatus for effecting this could easily be constructed, if it has not already been. But our present point is that because the importance of these two conditions was not clearly understood beforehand the whole of the immense labour employed upon the Eusapia report seems to have been wasted. Nor can we feel that the great amount of energy which Mr. Podmore devoted to criti- cisings its details was well spent. The whole of it was vitiated ab initio by the considerations which we have men- tioned, and which he himself had certainly perceived. It may be objected that evidence of the kind we require will never be forthcoming, that no medium will ever consent to such a "control" as we have described. We can only reply in Mr. Podmore's words :—

" Let renewed and again renewed attempts be made to procure physical effects under automatic check, and automatically recorded, and until success has been obtained, let us leave Eusapia in a decent obscurity. The mere fact that throughout its existence of more than sixty years modern spiritualism has no single piece of evidence of the kind to offer is in itself of extreme significance. If test experiments of the kind indicated have not been fre- quently tried—as we know they have been tried occasionally—so much the worse for the qualifications of the investigators. If they have been repeatedly tried, and have failed, so much the worse for the phenomena.'

But whatever difference of opinion there might be as to the particular conditions necessary for valid evidence in this particular case, our general contention would remalui that at

discussion of them is most useful in helping to clear the.mind before the beginning of the investigation. We have chosen our example from the so-called physical phenomena. But what we have said seems to apply equally well to the more complicated branch of the subject. For instance, let us take the hypothesis that the spirit of Frederic Myers is indeed communicating with us through various automatists. What we suggest is that some one should thoroughly consider what kind of evidence is necessary for supporting this hypothesis. The task is by no means a simple one; and it appears never to have been systematically attempted, though in a frag- mentary way it has been often discussed. Such a discussion would probably have prevented the almost universal assump- tion that cross-correspondences are among the best evidence in support of this hypothesis. A cross-correspondence of the complex sort may be defined as "the production through two or more mediums of apparently disconnected ideas which when combined reveal a whole which could not have been inferred from either of them singly." Even if such things were common, might it not be argued that they would only prove that some conscious being was producing them; that they would scarcely prove that the conscious being was "in the spirit" ; that they would certainly not prove that he was the particular dead person that be claimed to be? A cross- correspondence is a possible proof of organisation, not of iden- tity. As a means therefore of verifying the hypothesis from which we started above, all the experiments in cross-corre- spondence would seem to have been irrelevant. And although from other points of view they were undoubtedly of great interest, yet we can scarcely avoid thinking that experiments are more likely to be of use if the experimenters know clearly beforehand within what limits light is capable of being shed by them. Such knowledge, for instance, will obviously influence the arrangement of the conditions under which the experiments are to be made. It would be generally admitted (to take an example) that the display by a trance personality of a piece of knowledge which is also in the possession of the experimenter could not be accepted as evidence of anything more than telepathy. The experimenter, knowing this, aims so far as possible at extracting knowledge unknown to him- self, and also avoids acquiring any knowledge which he thinks it at all likely that the trance personality will reveal. This is one of the simpler rules which have already been arrived at from a clear comprehension of what kind of evidence is required to establish a certain hypothesis. If this compre- hension were to be extended and tabulated, we might after many discussions and emendations arrive at a kind of code of regulations for experimenters. Such a code would be likely to prevent those little slips in the severity of the conditions which often render unsatisfactory the evidence collected so laboriously, and would at the same time save the investigators much of the worry involved in deciding upon the necessary conditions in each individual case.