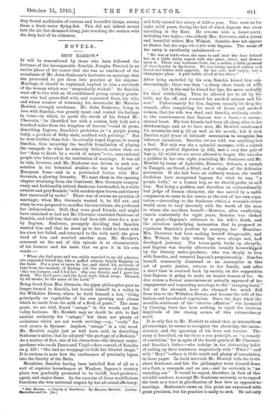 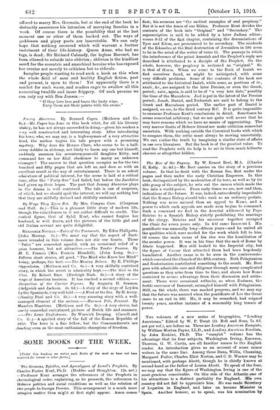 REST HARROW.* IT will be remembered by those who have followed the fortunes of the incomparable Sanchia Josephs, Percival in an earlier phase of her career that she was so convinced of the soundness of Mr. John Senhouse's doctrines on marriage that she proceeded to put them into practice at his expense.

Marriage, it should be explained, implied to him a servitude of the woman which was "unspeakably wicked." So Sanchia went off to live with an ill-conditioned young country gentle- man whO had quarrelled with, and separated from, his wife, and whose manner of trimming his moustache Mr: Maurice Hewlett strongly condemns. Mr. John Senhouse, being in love with Sanchia, was greatly upset, and vented his feelings

in verse—in which, to quote the words of hia friend Mr. Chevenix, "he identified her with a certain holy lady not a hundred miles from the kingdom of heaven "—and ,in prose, describing Ingram, Sanehia's protector, as "a purple young bully, a product of filthy sloth, scabbed with privilege." But he went further than this : he actually urged Ingram to marry Sanchia, thus incurring the terrible humiliation of playing the renegade to what he sincerely believed, rather than see her "done to death by a world of satyrs,"—i.e.,•conventiOnal people who believed in the institution of marriage. It was all in vain, however, and Mr. Senhouse was driven to seek con- solation in his botanical studies—he was a botanist of European fame—and in a protracted liaison with Mrs.

Germain, a glowing brunette. We meet them in the opening chapter returning from the Continent, Mrs. Germain sumptu- ously and fashionably attired, Senhouse bareheaded, in a white sweater and grey flannels, "with sandals upon brown and sinewy feet uncovered by socks." There was of course no 'question of marriage; when Mrs. Germain wanted it, he did not; and when he was prepared to sacrifice his convictions, she preferred her independence. Still, they were good friends, and might have remained so had not Mr. Chevenix reminded Senhouse of

Sanchia, and told him that she had been left alone for a year by Ingram. Senhouse, promptly deciding that Sanchia wanted him and that he must go to her, tried to break with his siren but failed, and returned to the toils until she grew tired of him and married another man. Mr. Hewlett's comment on the end of this episode is so characteristic

of his humour and his taste that we give it his own words :—

"When she had gone and was safely married to an old admirer, our expended friend lay, like a gaffed salmon, faintly flapping on the bank. For a year or more he lay, and dated his recovery • of tone from the moment of finding out the nature of his disaster. She was hungry, and I fed her. She was thirsty, and I gave her drink. The Lord gave, and the Lord bath taken away. Blessed, by all means, be the name of the Lord."

Being freed from Mrs. Germain, the gipsy philosopher-poet no longer turned to Sanchia, but buried himself in a valley in the Wiltshire Downs, where he built himself a hut, "living principally on vegetables of his own growing and cheese

which he made from the .milk of a. flock of goats," The same goats, we are told, found " eatage " in the woods and the valley bottoms. Mr. Hewlett may-no-doubt be able to find ancient authority for " eatage," but there are —plenty of archaisms which are not worth reviving,—e.g.; " cooly " for cool occurs in Spenser. Anyhow, " eatage" in a 'vile word. Mr. Hewlett might just as well have said," in deseribing Senhouse'er attire, that he adopted "the garbage Of &Bedouin."

As a-matter of fact, one of his characters—the literary' Under- gardener who reads Dante and Virgil—does remark of Sanchia on p. 225: "She had no wrappage to hide her- blissful shape." It is curious to note how the exuberance of preciosity lapses into the fatuity of the Babu.

Meantime, Sanchia having been installed' first of as a sort of superior housekeeper at Wanless, Ingram's country place, was gradually promoted to be bailiff, _head-gardener, agent, and major-domo. In the exercise of these multifarious functions she won universal respect by her all-round efficiency,

and fully earned her salary of £200.a year. This went oilier eight solid years, during the last of which •Ingram was aWay

travelling in the -East. He returns With a • house-party; including two ladies,—the elderly Mrs. Devereux•and a:iyoung and beautiful widow, Mrs. Wilmot. Sanchia does not ap-pi3ar at dinner, but she sups tete-a-tete with Ingram. The- netted' her entry is excellently upholstered :— " He was at table when she eatne in and -shut the -door behind' her, at a table fairly naped, with fine glass, silver, and flowers upon it. There was hothouse fruit, too, a melon,- a. little py ramirl of strawberries in fig-leaves. He was eating smoked salmon and. bread and butter with appetite. By his side, half :vat; a champagne glass. A pint bottle stood at his elbow." • • —1 After being encircled by his arm, Sanchia, kissed him con- descendingly; there was then "a sharp short tussle -of' will's.

but in the end he kissed her lips, the more ardently for their withholding. Then he allowed her to sit by the table, not far off, and resumed his smoked salmon and his

zest." Unfortunately for him, Ingram casually let drop the remark, after completing his meal of kisses and smoked salmon, that his wife was dead, and Sanchia suddenly awoke to the consciousness that Ingram was a . beast,—a savage, sensual beast. His best friends had been all along alive to his shortcomings, and, as we have seen, Mr. Hewlett. condemned his moustache (see p. 51) as well as his mouth; but it took Sa,ncbia eight years of intimate association to recognise his

' inherent animalism. Sanchia, we are told, was anythingbub a fool. Not only was she a. splendid manager,' with a suiterb. appetite, a perfect digestion (p. 132), and-a -very fine .pair legs (p. 52) which we are never allowed to forget. • She Wari also a goddess in her own right, reminding Mr. Senhouse andlft. Hewlett by turns of Aphrodite, Demeter, Artemis, a nymph in Tanagra, an Oread, a Sibyl, and a virgin of -the Athenian' procession. If she had been an ordinary woman, she +Joni& doubtless have recognised Ingram for What he was; purple bully," or a human hog, as we should prefer .tO-Call him. But being a goddess, and therefore an extraordinarily bad judge of human character, she was moved by a compassion to to come to his rescue at the cost of her own re,pn- tation.—According to the Senhouse ethics, a woman's virtue would seem to vary- inversely with the worth of the Man to whom she sacrifices herself.—However, after swallowing-- camels contentedly for eight years, Sanchia was choked by a gnat,—Ingram's reference to his wife:s death,. ancl. the atrocious underlying insinuation that he proposed to regularise Sanchia's position by marrying her. Meantime Mrs. Devereux had been making herself- disagreeable, and Mrs. Wilmot, the lady whose lips were always .wet, ).4a.

developed jealousy. The bouse-party. , broke up abruptly,. and Ingram was shortly afterwards soundly horsewhipped by the literary under-gardener, who was 'deeply. in love.

with Sanchia, and resented Ingram's proprietorship. .Sanchia, herself, summarily dismissed as an . accomplice in libis • act of poetic justice,. returns to her family, and affee a short time is received back by society, on •the' supposition that Ingram is going to make an honest Woman-of her. '4-n- due course a formal announcement actually appeared' cif her- engagement and impending marriage to the "ravaging heist," but at the eleventh hour she • changed- 'her Mira; • from him to the Wiltshire Downs, and became the Wife of 'the hatless and barefooted vegetarian. Since the days WOzilibe - maudlin sentiment of the " elective affinities" Was lacetat.O. by Canning there has been nothing to equal_ the .luscioia. ineptitude of the closing, scenes of. thin sextraordinary •

It is only fair to Mr. Hewlett to admit that, in.intermittent,

glimmerings, be seems to recognise the absurdity, the incon--.. sistency, and the ignominy of his hero and heroine. The- story is described, on the /um a non principle, as " a comedy' of resolution," for in spite of the hectic gaiety of Mr. Chevenix- and -Sanchia's father—who indulge in the distracting habit: of ending up their sentences respectively with " What ? " and( with " Hey ? "there is little mirth and plenty- of irresolatien.. in these pages. In lucid intervals Mr. Hewlett tells the truth about Senhouse, and lets the philosopher write himself down as a funk, a renegade, and an .ass,—and .he certainly is "an unending ass." It would be unjust, therefore, 'in face of. this suicidal candour, to accept Mr. Senhouse seriously, or to,regarosl the book as a tract in glorification of free .love as opposetLto marriage. Senhouse's views on this.-point are :expressed with.

great precision, but 'his practice is sadly to seek. , not.olily.

offered to marry Mrs. Germain, but at the end of the book he distinctly announces his intention of marrying Sanchia in a week. Of course there is the possibility that at the last moment one or other of them backed out. The ways of goddesses and Opsy poets are inscrutable. We can only hope that nothing occurred which will warrant a further instalment of their life-history. Queen Anne, who had no .legs, is dead ; Sir Richard Calmady, the legless Baronet, has been allowed to subside into oblivion ; Oblivion is the kindliest ineell for the eccentric and anarchical heroine who has exposed her creator not merely to criticism but to ridicule.

Imagine people wanting to read such a book as this when the whole field of sane and healthy English fiction, past aid present, is open to them ! Yet apparently there is a market for such wares, and readers eager to swallow all this nauseating twaddle and inane frippery. Of such persons we can only say with Ben Jonson :— "If they love lees and leave the lusty wine,

Envy them not their palate with the swine."