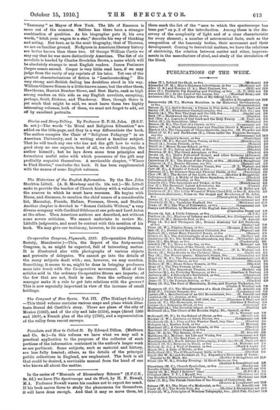 6d.) we have The Spectroscope and its Work, by H. F. Newell, M.A. Professor Newell warns his readers not to expect too much. If his book moves them to study the phenomena for themselves, it will have done enough. And that it may so move them, let them mark the list of the "uses to which the spectroscope has been put" on p. 2 of the introduction. Among these is the dis- covery of the complexity of light and of a clear characteristic for every element ; a number of astronomical facts, such as the composition of the heavenly bodies, their movement and their development. Coming to terrestrial matters, we have the relations of electricity, the relation between matter and ether, improve- ments in the manufacture of steel, and study of the circulation of the blood.