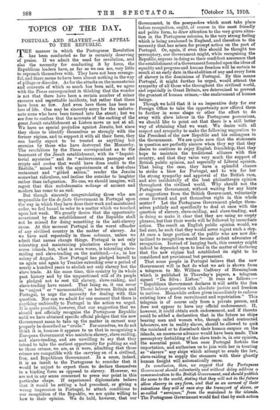 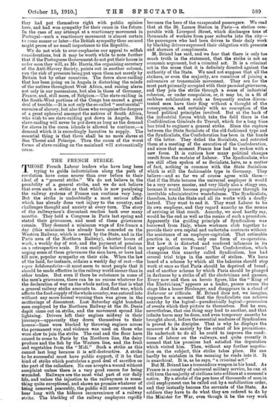 PORTUGAL AND SLAVERY.—AN APPEAL TO THE REPUBLIC.

THE manner in which the Portuguese Revolution has been conducted so far is certainly deserving of praise. If we admit the need for revolution, and also the necessity for conducting it by force, the Republican leaders have, as far as we can see, very little to reproach themselves with. They have not been revenge- ful, and there seems to have been almost nothing in the way of pillage or disorder. As for the attacks on the monasteries and convents of which so much has been said, we agree with the Times correspondent in thinking that the wonder is not that there have been a certain number of minor excesses and regrettable incidents, but rather that there have been so few. And even here there has been no loss of life. One may be sincerely sorry for the unfortu- nate nuns who have been turned into the street ; but we are free to confess that the accounts of the sacking of the great Jesuit establishment at Lisbon move us not at all. We have no special prejudice against Jesuits, but since they chose to identify themselves so strongly with the former regime, and to support it with all their force, they can hardly expect to be treated as anything but enemies by those who have destroyed the Monarchy. The revelations by the Times correspondent as to the basement of the Jesuit establishment, with its " Inquisi- torial mysteries" and its "subterranean passages and crypts and caches that would have done credit to the Bastille," mixed with the appointments of a first-class restaurant and "gilded salons," render the Jesuits somewhat ridiculous, and incline the outsider to laughter rather than indignation. No one, we should imagine, will regret that this melodramatic mélange of ancient and modern has come to an end.

Bat though sincerely congratulating those who are responsible for the de facto Government in Portugal upon the way in which they have done their work and maintained order, we feel bound to refer to a matter which we touched upon last week. We greatly desire that the opportunity occasioned by the establishment of the Republic shall not be missed for doing something in the anti-slavery cause. At this moment Portugal is the worst offender of any civilised country in the matter of slavery. As we have said repeatedly in these columns, unless we admit that names change things, Portugal is not only tolerating and maintaining plantation slavery in the cocoa islands, but, what is even worse, is tolerating slave- raiding and slave-trading on the mainland,—i.e., in her colony of Angola. Now Portugal has pledged herself to us again and again by Treaties extending over a period of nearly a hundred years to abolish not only slavery but the slave trade. At the same time, this country by its whole past history and by the unquestioned. will of its people is pledged not to rest till slavery, slave-raiding, and slave-trading have ceased. That being so, it can never be " unjust " or "unreasonable," as between Britain and Portugal, to urge the necessity for dealing with this question. Nor can we admit for one moment that there is anything unfriendly to Portugal in the action we urged. It is quite possible, however, that our suggestion that we should not officially recognise the Portuguese Republic until we have obtained specific official pledges that the new Government mean to take up the matter in earnest may properly be described as "crude." For ourselves, we do not think it is, because it appears to us that in recognising a European Government who maintain slavery, slave-raiding, and slave-trading, and are unwilling to say that they intend to take the earliest opportunity for putting an end to those crimes, we are, as it were, admitting that those crimes are compatible with the carrying on of a civilised, free, and Republican Government. In a sense, indeed, it is an insult to the Portuguese to consider that it would be unjust to expect them to declare themselves in a binding form as opposed to slavery. However, we are not in any sense concerned to press our point in this particular • shape. If experienced diplomatists believe that it would be setting a bad precedent, or giving a wrong impression in Portugal, to attach conditions to our recognition of the Republic, we are quite willing to bow to their opinion. We do hold, however, that our Government, in the pourpariers which must take place before recognition, ought, of course in the most friendly and polite form, to draw attention to the very grave situa- tion in the Portuguese colonies, to the very strong feeling which is being awakened in England, and therefore to the necessity that has arisen for prompt action on the part of Portugal. Or, again, if even this should be thought too peremptory, our Government might, while recognising the Republic, express in doing so their confident assurance that the establishment of a Government founded upon the ideas of equality and progress and human freedom will be certain to result at an early date in the abolition of any and every form of slavery in the dominions of Portugal. By this means Portugal, it might further be urged, would attract the sympathy of all those who throughout the civilised world, and especially in Great Britain, are determined to prevent the greatest of human crimes,—the enslavement of human beings.

Though we hold that it is an imperative duty for our Foreign Office to take the opportunity now offered. them to further in some shape or other the effort to do away with slave labour in the Portuguese possessions, we should. like to point out that there is a still better way of obtaining what we want. We desire with all respect and sympathy to make the following suggestion to the President of the new Republic and his colleagues in the Government. We are quite sure that the statesmen in question are perfectly sincere when they say that they desire to continue to enjoy English friendship, that they hope to maintain the traditional alliance with this country, and. that they value very much the support of British public opinion, and especially of Liberal opinion. That being the case, they have a splendid chance to strike a blow for Portugal, and to win for her the strong sympathy and approval of the British race, and also incidentally of the best philanthropic opinion throughout the civilised world. Why should not the Portuguese Government, without waiting for any hints or suggestions from the British Government, voluntarily come forward and put themselves right in this whole matter? Let the Portuguese Government pledge them- selves publicly and specifically to deal at once with the question of slavery, slave-raiding, and, slave-trading, and in doing so make it clear that they are using no empty phrases, but that their words will be followed by immediate action. The result on English public opinion would, we feel sure, be such that they would never regret such a step. At once a large portion of the public who are now dis- inclined to recognition would become ardent advocates of recognition. Instead of hanging back, this country might indeed be depended upon to lead in the matter of declaring that the new regime had established its right to be considered not provisional but permanent.

That some people in Portugal believe that the new Government will in fact do what we ask is shown from a telegram to Mr. William Cadbury of Birmingham which is published in Thursday's papers, a telegram signed "Pa. Silva : Lisbon." It runs as follows :— "Republican Government declares it will settle the San Thome labour question with absolute justice and freedom to natives. Meanwhile orders given immediately to enforce existing laws of free recruitment and repatriation." This telegram is of course only from a private person, and does not appear to have any official endorsement. If, however, it could obtain such endorsement, and if thereto could be added a declaration that in the future no ships bearing men and women who, though called contracted labourers, are in reality slaves, should be allowed to quit the mainland or to disembark their human cargoes on the islands, an enormous advance would have been made. This peremptory forbidding of the slave trade is, in our opinion, the essential point. When once Portugal forbids the importation, and. authorises us to join with her in treating as " slavers " any ships which attempt to evade the law, slave-raiding to supply the steamers with their ghastly human freight will automatically cease.

In conclusion, then, we suggest that the Portuguese Government should voluntarily and without delay address a communication to the British Government, and should publish. the same to the world, stating that they will not in the future allow slavery in any form, and that as an earnest of their intentions they will at once stop the transport of slaves, or so-called " servicaes," from the mainland to the islands. The Portuguese Government would find that by such action they had put themselves right with public opinion here, and. had. won sympathy for their cause in the future. In the case of any attempt at a reactionary movement in Portugal—such a reactionary movement is almost certain to come sooner or later—the British sympathy thus secured might prove of no small importance to the Republic., We do not wish to over-emphasise our appeal to selfish considerations, but it may be worth while to note further that if the Portuguese Government do not put their house in order soon they will, as Mr. Harris, the organising secretary of the Anti-Slavery Society, points out in another column, run the risk of pressure being put upon them not merely by Britain but by other countries. The fierce slave-raiding that has been going on in. Angola. is disturbing the minds of the natives throughout West Africa, and raising alarm not only in our possessions, but also in those of Germany, France, and., still more, of Belgium.—The slave-raiding in the South-West portions of the Congo has caused a great deal of trouble.—It is not only the so-called "sentimental" enemies of slavery, but also those who recognise the dangers of a great upheaval amongst the natives of South Africa, who wish to see slave-raiding put down in Angola. But slave-raiding will never be put down as long as the demand for slaves in the cocoa islands is allowed. to continue,—a demand which it is exceed i gly lucrative to supply. The essential thing is that there shall be no more slaves at San Thome and Principe. Then the cause of the worst forms of slave-raiding on the mainland. will automatically cease.