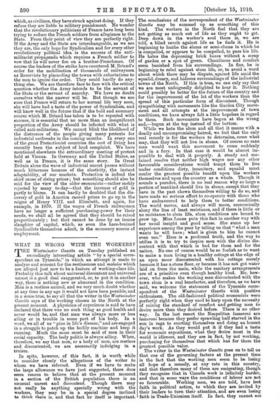 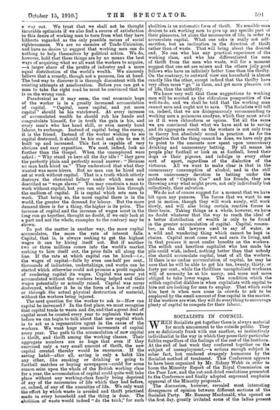 Page 6, 15 October 1910 — WHAT IS WRONG WITH THE WORKERS? T HE Westminster Gazette on
Close

WHAT IS WRONG WITH THE WORKERS? T HE Westminster Gazette on

Tuesday published an exceedingly interesting article "by a special corre- spondent on Tyneside," in which an attempt is made to analyse and account for the restlessness and malaise which are alleged just now to be a feature of working-class life. Probably this talk about universal discontent and universal unrest is a good deal exaggerated, or, to put it in another way, there is nothing new or abnormal in the condition. Man is a restless animal, and we very much doubt whether at any time in any age it would not have been possible, and in a sense true, to say all that the writer in the Westminster Gazette says of the working classes in the North at the present moment. A physician of experience is said to have declared that there was no such thing as good health and never would be, and that man was always more or less ailing or in trouble in some part of his body. In a word, we all of us "pine in life's disease," and are engaged in a struggle to patch up the bodily machine and keep it running. Much the same must be said of men in their social capacity. The body politic is always ailing. When, therefore, we say that men, or a body of men, are restless and discontented, we are necessarily indulging in a truism.

Paradoxical as it may seem, the real economic hope of the worker is in a .greatly increased accumulation of capital. "Capital, more capital, and yet more capital" should be his watchword. At every increase of accumulated wealth he should rub his hands and congratulate himself, for in truth the gain is his, and every man's who has hand skill, or even merely hand.

labour, to exchange. Instead of capital being the enemy, it is the friend. Instead of the worker wishing to see capital destroyed, it should be his end and aim to see it built up and increased. This fact is capable of very obvious and easy exposition. We need, indeed, look no further than the Gospel. When the unemployed were asked : "Why stand ye here all the day idle ? " they gave the perfectly plain and perfectly sound answer : "Because no man hath hired us." They understood that what they wanted was more hirers. But no man can be hired and set at work without capital. That is a truth which utterly destroys the rhetorical fallacy under which men are described as "wage slaves." You may constrain a man to work without capital, but you can only hire him through the medium of capital. It is capital which sets men to work. That being so, the more capital there is in the world, the greater the demand for labour. But the more demand there is for a thing, the higher is its price. The increase of capital and. the increase of wages must in the long run go together, thought no doubt, if we only look at a part and not the whole, examples to the contrary may be shown.

To put the matter_ in another way, the more capital accumulates, the more the rate of interest falls. Capital, that is, is always seeking to get the highest wages it can by hiring itself out. But if another two or three millions comes into the world's market seeking to hire itself out, the price falls all along the line. If the rate at which capital can be hired—i.e., the wages of capital—falls by even one-half per cent., thousands of industries, undertakings, and works can be started which otherwise could not promise a profit capable of rendering capital its wages. Capital was never yet accumulated without the workers being helped and their wages potentially or actually raised. Capital was never destroyed, whether it be in the form of a loss of credit or through the actual physical destruction of material, without the workers being injured.

The next question for the worker to ask is—How can capital be increased ? In the first place, we must recognise that capital tends to waste and die, and that a great deal of capital must be created every year to replenish the waste before we can begin to talk about that new capital which is to act as a regenerative agent in the cause of the workers. We want huge annual increments of capital every year. The path to the accumulation of new capital is thrift, and thrift among the working classes. Their aggregate numbers are so huge that even if they exercised only a very small amount of thrift, the new capital created thereby would. be enormous. If the saving habit—after all, saving is only a habit like any other, like smoking or drinking or going to football matches or buying newspapers—could for some reason seize upon the whole of the British working class • for a year, the accumulation of capital could quite well take place without any working-class family being deprived Of any of the necessaries of life which they had before, or, indeed, of any of the amenities of life. We only want the effort by which waste is avoided and thrift practised made in every household and the thing is done. The abolition of waste would indeed "do the trick," for such abolition is an automatic form of thrift. No sensible man desires to ask working men to give up any specific part of their pleasures, let alone the necessaries of life, in order to accumulate capital. What one asks is really not self- sacrifice, but an inclination in the direction of thrift rather than of waste. That will bring about the desired end. No one who has any practical experience of the working class, and who has differentiated the men of thrift from the men who waste, will for a moment suggest that one set are misers and the others jolly good fellows who have an infinitely better time than the thrifty. On the contrary, to outward view one household is almost exactly like the other, except indeed that the thrifty have very often more " go " in them, and get more pleasure out of life, than the unthrifty. We know very well that these suggestions to workinc, men will be scouted as the ridiculous pomposities of the well-to-do, and we shall be told that the working man cannot save and. ought not to save. The Socialists will tell us, indeed, that we are disingenuously recommending to working men a poisonous anodyne, which they must avoid as if it were chloroform or opium. Yet all the same we are convinced. that what we have said. as to saving and its aggregate result on the workers is not only true in theory but absolutely sound in practice. As for the allegation that the thing cannot be done, we have only got to point to the amounts now spent upon unnecessary drinking and. unnecessary betting. By all means let people play football or look on at football, breed their dogs or their pigeons, and indulge in every other sort of sport, regardless of the dialectics of the virtuous. All we want to make clear is that in the unnecessary consumption of alcohol, and in the still more unnecessary devotion to betting under the guidance of "Captain Coo" and his friends, they are throwing away what might prove, not only individually but collectively, their salvation.

We do not of course suggest for a moment that we have hit upon any panacea. The forces that we want to see put in motion, though they will work surely, will work slowly, and will also bring certain reactive forces in their train. Taking things as a whole, however, we have no doubt whatever that the way to reach the ideal of a better distribution of wealth is only to be found in the greater accumulation of capital. Capital, remem- ber, as the old lawyers used to say of water, is a wild and wandering thing which cannot be kept in chains. Capital must come out and, earn its living, and in that process it must confer benefits on the workers. The selfish and heartless capitalist who has made his pile could wish, indeed, nothing better than that nobody else should accumulate capital, least of all the workers. If there is no undue accumulation of capital, he may be sure that he will be able to get his ten, twenty, thirty, or forty per cent., while the thriftless uncapitalised workman will of necessity be at his mercy, and more and more obliged to take lower wages. The condition which the selfish capitalist dislikes is when capitalists with capital to hire out are looking for men to employ. That which suits him best is when men come in crowds to ask to be employed by the small amount of free capital in the market. If the workers are wise, they will do everything to encourage plenty of capital to compete for their labour.