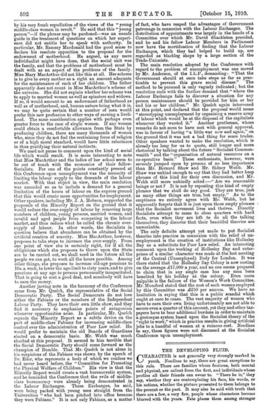 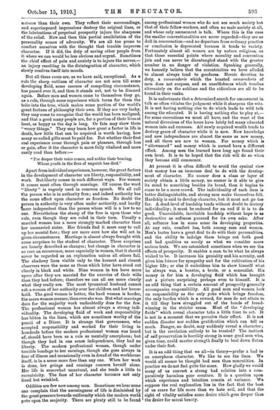 CHARACTER is not generally very strongly marked in youth. Needless to say, there are great exceptions to this rule. There are families whose features, both mental and physical, are salient from the first, and individuals whose profiles all their friends can swear to. "There he is," they say, whether they are contemplating his face, his words, or his actions, whether the picture presented to them belongs to the present or the past. It may also be said with truth that there are a few, a very few, people whose characters become blurred with the years. Fate places them among stronger

natures than their own. They reflect their surroundings, and superimposed impressions destroy the original lines, or the lubrications of perpetual prosperity injure the sharpness of the relief. Now and then this partial annihilation of the personality comes of adversity. We are all too prone to comfort ourselves with the thought that trouble improves character. If it did, the duty of saving other people from it where we can would be less obvious and urgent. Sometimes the chief effect of pain and anxiety is to injure the nerves,— an injury resulting in the disintegration of character, which slowly resolves itself into moods.

But all these cases are, as we have said, exceptional. As a rule the sharp outlines of character are not seen till some developing fluid, some essence of compelling circumstance, has passed over it, and then it stands out, not to be dimmed again. Before men and women come to themselves they go, as a rule, through some experience which turns for them the trite into the true, which makes some portion of the world's great fortune of philosophy their own. If they are very lucky, they may come to recognise that the world has been maligned, and that a good many people are, for a portion of their lives at least, as happy as the day is long. Or fate may show them "weary things." They may learn how great a factor in life is death, how little that can be acquired is worth having, how many so-called gifts must be paid for. But whether their first real experience come through pain or pleasure, through loss or gain, after it the character is more fully vitalised and more easily read than before "For deeper their voice comes, and nobler their bearing, Whose youth in the fires of anguish has died."

Apart from individual experiences, however, the great factors in the development of character are liberty, responsibility, and work. But liberty comes in such different ways. For women it comes most often through marriage. Of course the word " liberty " is vaguely used in common speech. We all call the person who is in authority free ; and indeed authority has the same effect upon character as freedom. No doubt the person in authority is very often under authority, and hardly more independent than the person whose will is a law to no one. Nevertheless the stamp of the free is upon those who rule, even though they are ruled in their turn. Usually a married woman has a more strongly marked character than her unmarried sister. Her friends find it more easy to call up her mental face ; they are more sure how she will act in given circumstances. Marriage is almost always fraught with some surprises to the student of character. These surprises are loosely described as changes ; but change in character is so rare an occurrence, more especially in women, that it should never be regarded as an explanation unless all others fail. The shadowy lines visible only to the keenest and closest observers were the same as those which later have stood out clearly in black and white. Nine women in ten have more space after they are married for the exercise of their wills than they had before; therefore we can all see more clearly what they really are. The most tyrannical husband cannot rob a woman of her authority over her children and her house- hold. The good woman is better, the hard woman is harder, the mean woman meaner, than ever she was. But what marriage does for the majority work undoubtedly does for the few. The professional woman has almost always a strong indi- viduality. The developing fluid of work and responsibility has bitten in the lines, which are sometimes worthy of the pencil of a Darer. It is strange that governesses, who accepted responsibility and worked for their living in hundreds before the modern professional woman was heard of, should have been as a rule so mentally amorphous; but though they had in one sense independence, they had no liberty. The modern professional woman, though under terrible bondage to her earnings, though she goes always in fear of illness and occasionally even in dread of the workhouse itself, is in a sense more free than any one. When her work is done, her goings and comings concern herself alone. Her life is somewhat unnatural, and she tends a little to eccentricity. The face of her character becomes not only lined but wrinkled.

Oddities are few now among men. Sometimes we hear some one complain that the amusinguess of life is diminished by the great pressure towards uniformity which the modern world puts upon the majority. There are plenty still to be found

among professional women who do not see much society but that of their fellow-workers, and often no male society at all, and whose only amusement is talk. Where this is the case the smaller conventionalities are never regarded—they are so dull in conversation—and no departure from ordinary practice or conclusion is deprecated because it tends to variety. Fortunately almost all women are by nature religious, so that those essential points where morality and convention join and can never be disentangled stand with the greater number in no danger of violation. Speaking generally, we honestly believe that the eccentricities we have alluded to almost always tend to goodness. Heroic devotion to duty, a camaraderie which the boasted camaraderie of men does not surpass, and an unselfishness which touches alternately on the sublime and the ridiculous are all to be found in their ranks.

It is unfortunate that a determined search for amusement in talk so often vitiates the judgment while it sharpens the wits. It is not having nothing else to do which leads to wild talk among the educated. It is having nothing else to play at,— for some recreations we must all have, and the want of the natural diversions of the home have lately led many educated women into sad excesses. All newly acquired wealth tends to destroy grace of character while it is new. New knowledge and new independence are almost the same as new money, and all three are new to women. For money which is " allowanced " and money which is earned have a different effect. Among men the learned have long ago found their own level. It is to be hoped that the rich will do so when they become still commoner.

At present it is often difficult to avoid the cynical view that money has an immense deal to do with the develop- ment of character. No sooner does a class or layer of society obtain a little money, no sooner is it able to give its mind to something besides its bread, than it begins to cease to be a mere crowd. The individuality of each item is better distinguishable, and strong men make themselves felt. Hardship is said to develop character, but it must not go too far. A dead-level of hardship tends without doubt to destroy individuality; it must be endured for an end if it is to do good. Unavoidable, inevitable hardship without hope is as destructive as softness pursued for its own sake. After all, softness has in some sense its developing properties. At any rate, comfort has, both among men and women. Men's tastes have a great deal to do with their personalities, and the ability to indulge them brings out both good and bad qualities as surely as what we consider more serious tests. We are astonished sometimes when we see the effects of prosperity. It enables a man to be what he always wished to be. It increases his geniality and hi a serenity, and gives him leisure for sympathy and for the cultivation of his higher life ; or else it emboldens him to show himself what he always was, a boaster, a brute, or a sensualist. His

money is for him a developing fluid which has brought out a picture surprising perhaps even to himself. It is

an odd thing that a certain amount of prosperity generally accompanies responsibility. All good men and women look on responsibility as the only yoke which brings freedom, the only burden which is a reward, for men do not attain to it till they have struggled out of the bonds of bread- winning in the stricter sense. Most of the "developing fluids" which reveal character take a little time to act. It is not in a moment that we perceive their effect. It is not sudden disaster nor sudden gratification which can tell us much. Danger, no doubt, may suddenly reveal a character ; but is the revelation entirely to be trusted? The instinct of self-preservation is horribly strong in some good men who, given time, could muster strength finally to beat down Satan under their feet.

It is an odd thing that we all—in theory—prefer a bad to an amorphous character. We like to see the lines. We would all sooner be thought bad men than nonentities. In practice we do not feel quite the same. How gladly we would many of us convert a strong bad relation into a com- paratively harmless poor creature. It is a question upon which experience and intuition remain at variance. We suppose the real explanation lies in the fact that the beat of us crave for life more than we hate evil, and that the sight of vitality satisfies some desire which goes deeper than the desire for moral beauty.