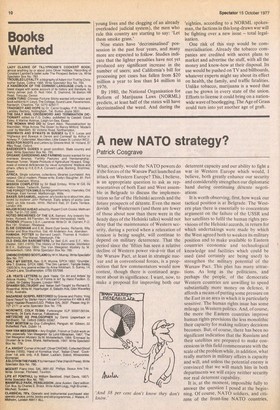 LADY CLARKE OF TILLYPRONIE'S COOKERS' BOOK; almost anything by or about John Oliver Hobbes. Recording of Constant Lambed s ballet suite The Prospect Before Us. Write Spectator Box No. 783. TROUBLED LOYALTY: a biography of Adam Von Trott by Christopher Sykes, Collins 1968. Write Spectator Box No. 784. A HANDBOOK OF THE CORNISH LANGUAGE chiefly in its latest stages with some account of its history and literature, by Henry Jenner, pub. D. Nutt 1904. S. Diamond. 36 Barton Hill Road, Torquay, Devon.

A SLOTH IN THE FAMILY by Hermann Tirler (Harvill Press). Write Spectator Box No. 780.

young lives and the clogging of an already overloaded judicial system), the men who rule this country are starting to say: 'Let them smoke grass.' Nine states have 'decriminalised' possession in the past four years, and many more are expected to follow. Studies indicate that the lighter penalties have not yet produced any significant increase in the number of users; and California's bill for processing pot cases has fallen from $20 million a year to less than $4 million in 1976.

By 1980, the National Organisation for Reform of Marijuana Laws (NORML) predicts, at least half of the states will have decriminalised the weed. And during the 'eighties, according to a NORML spokesman, the factions in this long-drawn war will be fighting over a new issue — total legalisation.

One risk of this step would be commercialisation. Already the tobacco companies are credited with secret plans to market and advertise the stuff, with all the money and know-how at their disposal. Its use would be pushed on TV and billboards, whatever experts might say about its effect on health, the family, and traffic fatalities. Unlike tobacco, marijuana is a weed that can be grown in every state of the union. Efforts to license it could bring on a nationwide wave of bootlegging. The Age of Grass could turn into yet another age of graft.