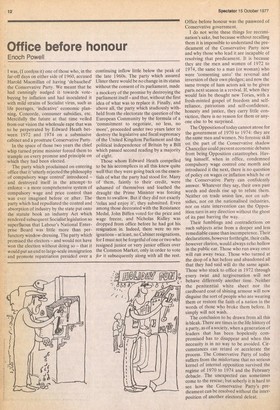 I was, (1 confess it) one of those who, in the far-off days on either side of 1960, accused Harold Macmillan of having 'debauched' the Conservative Party. We meant that he had cunningly nudged it towards votebuying by inflation and had inoculated it with mild strains of Socialist virus, such as life peerages, 'indicative' economic planning, Concorde, consumer subsidies, etc. Mercifully the future at that time veiled from our vision the wholesale rape that was to be perpetrated by Edward Heath between 1972 and 1974 on a submissive cabinet and a prostrate Conservative Party.

In the space of those two years the chief whip turned prime minister forced them to trample on every promise and principle on which they had been elected.

The party which proclaimed on entering office that it 'utterly rejected the philosophy of compulsory wage control' introduced — and destroyed itself in the attempt to enforce — a more comprehensive system of compulsory wage and price control than was ever imagined before or after. The party which had repudiated the control and absorption of industry by the state put onto the statute book an industry Act which rendered subsequent Socialist legislation so superfluous that Labour's National Enterprise Board was little more than perfunctory window-dressing. The party which promised the electors — and would not have won the election without doing so — that it would put an end to large-scale immigration and promote repatriation presided over a continuing inflow little below the peak of the late 1960s. The party which assured Ulster there would be no change in its status without the consent of its parliament, made a mockery of the promise by destroying the parliament itself—and that, without the first idea of what was to replace it. Finally, and above all, the party which studiously withheld from the electorate the question of the European Community by the formula of a 'commitment to negotiate, no less, no more', proceeded under two years later to destroy the legislative and fiscal supremacy of the United Kingdom Parliament and the political independence of Britain by a Bill • which passed second reading by a majority of eight.

Those whom Edward Heath compelled to be his accomplices in all this knew quite well that they were going back on the essentials of what the party had stood for. Many of them, faintly to their credit, were ashamed of themselves and loathed the draught the Prime Minister was forcing them to swallow. But if they did not exactly 'relax and enjoy it', they submitted. Even among those decorated with the Resistance Medal, John Biffen voted for the price and wage freeze, and Nicholas Ridley was dropped from office before he had got his resignation in. Indeed, there were no resignations — at least, no Cabinet resignations, for! must not be forgetful of one or two who resigned junior or very junior offices over the Common Market, only in order to vote for it subsequently along with all the rest. Office before honour was the password of Conservative government.

I do not write these things for recrimination's sake, but because without recalling them it is impossible to understand the predicament of the Conservative Party now and why those who lead it are incapable of resolving that predicament. It is because they are the men and women of 1972 to 1974, the same to a man (or woman) who were 'consenting unto' the reversal and inversion of their own pledges; and now the same troupe of ham actors ask to be given parts next season in a revival. If, when they would fain be thought new Tories, with a fresh-minted gospel of freedom and selfreliance, patriotism and self-confidence, honesty and justice, they carry little .conviction, there is no reason for them or anyone else to be surprised.

The Opposition-of today cannot atone for the government of 1970 to 1974: they are the same men and women. No forensic skill on the part of the Conservative shadow Chancellor could prevent economic debates from being Opposition catastrophes. Having himself, when in office, condemned compulsory wage control one month and introduced it the next, there is no question of policy on wages or inflation which he or the Conservative Party can confidently answer. Whatever they say, their own past words and deeds rise up to refute them. Neither on trade union law, nor on subsidies, nor on the nationalised industries, nor on state intervention can the Opposition turn in any direction without the ghost of its past barring the way.

Their fumblings and contradictions on such subjects arise from a deeper and less remediable cause than incompetence. Their declarations, however forthright, their calls, however clarion, would always echo hollow in the public ear. Those who run away once will run away twice. Those who turned at the drop of a hat before and abandoned all that they had said will do the same again. Those who stuck to office in 1972 through every twist and tergiversation will not behave differently another time. Neither the penitential white sheet nor the cardboard coat of shining armour will now disguise the sort of people who are wearing them or restore the faith of a nation in the words of those who broke them before. It simply will not wash.

The conclusion to be drawn from all this is bleak. There are times in the life history of a party, as of a society, when a generation of leaders that has been hopelessly compromised has to disappear and when this necessity is in no way to be avoided. Circumstances can retard or accelerate the process. The Conservative Party of today suffers from the misfortune that no serious kernel of internal opposition survived the regime of 1970 to 1974 and the February debacle. The unexpected can sometimes come to the rescue; but soberly it is hard to see how the Conservative Party's predicament can be resolved without the interposition of another electoral defeat.